For those of you not familiar with BC Place Stadium, take a look: 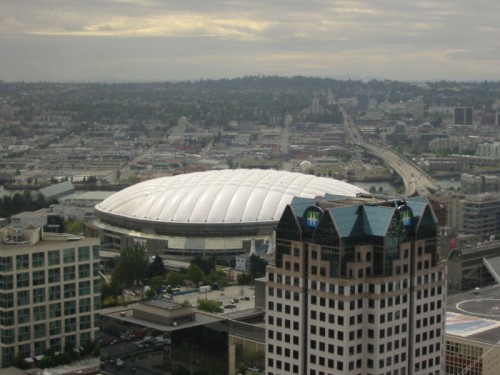 Here are some other similarities:

Two domed stadiums with air-supported roofs, built at a similar time, that have received a ton of use by a variety of sports and major events including some of the largest events in the world (Winter Olympics & Super Bowl). In both cases, a case could be made that the current stadium was due for an upgrade.

In Minnesota, the upgrade process has involved building stadiums for the Gophers and Twins at a combined cost of around $860 million in 2011 dollars. But, we’re not done. The Vikings want to build a 21,000 car parking lot in Arden Hills (along with a stadium) at a cost of more than $1.1 billion.

Which would bring our Metrodome replacement costs (combined public/private) to nearly $2 billion.

Vancouver took a different approach. Rather than build a new stadium(s) from scratch, they refurbished BC Place. Cost: $554 million in 2001 USD.

Seriously. Check this out:

Here are a few highlights (beyond fiscal sanity):

That center-hung scoreboard is the 2nd largest in North America. Only Dallas has a bigger one.

One of the beefs with the Metrodome is that people want a retractable roof. BC Place’s refurb included adding an retractable roof. Watch the video starting from 1:00 to see the roof retract. It’s an amazing piece of engineering.

Soccer: BC Place’s turf has received FIFA’s highest certification (2 stars) and is home to the MSL’s Vancouver Whitecaps.

Looking at the wisdom that’s gone in to Vancouver’s stadium construction, it’s pretty clear that there is a better way to do this than what the Vikings are demanding.

By refurbishing the Metrodome, Wilf could have a retractable roof stadium with upgraded seating, luxury suites, concessions, and bathrooms. It’s been done. The concept is proven.

And, by using a combination of personal seat licenses and stadium naming rights revenue, Wilf could likely pay for this with NO public financing.