With the resignation of “failed burrito barron” and head of the MN GOP, Tony Sutton, the party of bigotry has a chance to rebuild. Some of that rebuilding will involve getting the MN GOP financial house in order. But, as Rep. John Kriesel points out, it’s also an opportunity to increase their appeal to today’s electorate.

Sutton’s replacement is Kelly Fenton, who describes herself on Twitter as:

Is Fenton capable of change? Here are some examples of her Tweets:

In June, during the budget debate, she took time to stick up for the 2% richest Minnesotans at the expense of the 98%.

In July, she took time to explain that the current debt issues are Obama’s fault and have nothing to do with the tax cuts instituted under the Bush administration. You know: The tax cuts that, if allowed to expire, would solve our current budget issues.

It didn’t occur to me that anyone was working to shut down businesses in the state. I’d love to see an example of that.

Strange. It’s almost as if there is a non-equal distribution of wealth, leading to people with more contributing more while those with less giving what they can. 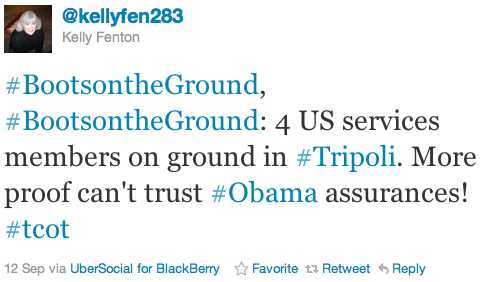 More Obama bashing. Strangely, no follow-up tweet regarding the end of Gaddafi’s reign is found.

For Fenton, it’s not just the revolution in Libya where Obama deserves no credit. Clearly, it was 7 years of Bush not capturing or killing Bin Laden which led to Obama getting the job done. Bush was just softening OBL up for Obama, ya see.

Based on what I’m seeing, I think Kriesel isn’t going to see much change at the top of his party.

One more for Rep. Kriesel. When the house was debating the Marriage Amendment bill, and Rep. Kriesel took time to speak in favor of equality for all Minnesotans, Kelly Fenton took to Twitter to say this:

Which, of course, is just a despicable way to say “Rather than just leave our state marriage laws the way they are today, let’s put discriminating against a state minority population to a vote by the majority.”