Remember yesterday when I wrote about the Wilf family’s donation of enough money to a school that the school would slap their family name on a building?

Here’s an interesting nugget about that: The building they helped pay for in New York includes “Cool features include a green roof and terraces, and bike storage space.”

The Roof is Alive
A green roof and two planted terraces, bedded with grasses, ferns, and trees, will help insulate the building year-round and filter pollutants out of rainwater, thereby reducing runoff into the city’s sewers. Terraces on the second and sixth floors serve as informal meeting areas, with walking paths enclosed by creeping perennials and grasses.

But, it turns out that that’s not the case. Instead, the Wilf family wants to build a 21,000 car parking lot in a non-transit friendly suburb rather than refurbish our existing stadium or build a new stadium on our current transit system. One would have to be either downright stupid or extremely greedy to ignore the benefits of refurbishing an existing stadium or building on transit lines. In this case, I’m going to assume that greed is causing ignorance. 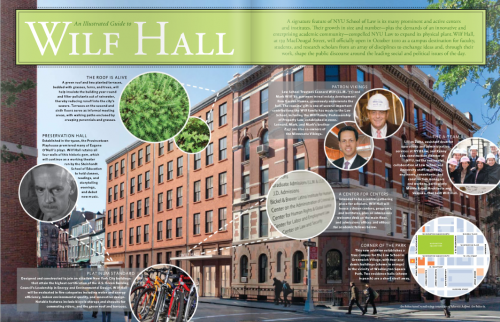 The Wilf’s generous donation to NYU Law School didn’t earn them the cover of the alumni mag, but they did get a 2-page spread on Pages 10-11. The article recalls the history of the building the Wilf family name has been attached to:

Preservation Hall
Established in the 1920s, the Provincetown Playhouse premiered many of Eugene O’Neill’s plays. Wilf Hall retains all four walls of this historic gem, which will continue as a working theater run by the Steinhardt School of Education to hold classes, readings, and storytelling evenings, and debut new music.

Sounds like a solid act of preservation. Imagine what could be done in Minnesota if the Wilf family applied the same level of generosity, ecological considerations, and historic preservation to their stadium plans? Were they to do that, they could refurbish the Metrodome into a next generation facility. Leverage as much of the current structure as feasible. Avoid sprawl. Build an eco-friendly tailgating facility. And continue the team’s history in the City of Minneapolis for many more decades as the location that’s been the home to the team for the majority of the team’s history.

Should the Wilf family do for the State of Minnesota what they’ve done for the NYU Law School, I’m confident that they’d get much more than Page 10-11 coverage in this market.