One interesting thing about Zygi Wilf buying a $19 million home on Park Ave in New York City is that many people realized for the first time that the owner if the Vikings is not a Minnesotan. It finally dawned on them that the State of Minnesota would be extracting money from Minnesota residents to increase the profitability of a company owned by a guy from New Jersey who purchased a $19 million home in New York City.

Here is another interesting angle: While Zygi Wilf is the front man for the Vikings, the Wilf family owns the Vikings, including Owner/President, Mark Wilf.

The Wilf family employs people like Lester Bagley to demand hundreds of millions of dollars in public subsidies from the State of Minnesota while their busy cutting ribbons in New York City: 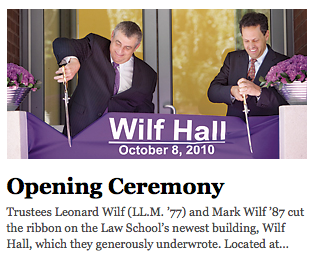 That’s right. Vikings Owner/President Mark Wilf and Vikings Owner/Vice Chairmain Leonard Wilf are simultaneously donating buildings in New York while demanding public subsidies for buildings in Minnesota. While it’s certainly generous to donate enough money to a university to get your family’s name on the building and a mention in the alumni newsletter, if you have to publicly subsidize your business in able to afford that type of ostentatious giving, perhaps you can’t really afford both, Wilf family?