Zygi Wilf wants to build a $1.1 billion stadium with other people’s money. That’s a good deal if you can get it, but not necessarily a good deal for those doing the giving.

As of now, the Vikings stadium #wilfare plan seems to involve the state borrowing $650,000,000 on Zygi Wilf’s behalf to build a stadium for him where he can profit from charging for parking in a 21,000 car parking lot, stadium naming rights, box seats, etc.

The Vikings talk about the return the state receives from being blessed with an NFL franchise. However, it looks like less of a blessing when quantified in a spreadsheet.

The consulting firm the Vikings have worked with to explain the the Vikings’ economic impact is called CSL. Back when the Vikings were attempting to wrangle $300 million out of the state and $350 million out of Ramsey County, CSL ran some numbers that showed that the Vikings would generate a positive return for the state over 40 years. The assumptions that went in to that report were interesting, including the 40 year lifetime of a stadium. That’s odd, considering that the Vikings have never played for longer than 30 years in a stadium to date, and are only willing to sign a 30 year lease for a new stadium. CSL also gives the Vikings credit for all of the sales tax revenue generated at the stadium, which is very generous since it assumes that NONE of that money would have been spent on anything else taxable in the State of MN sans Vikings.

But, plans have changed. The state has proven to be unwilling to let Tony Bennett screw Ramsey County residents for Zygi Wilf’s benefit. This leads to the state also being in the position of coming up with $650 million on its own.

As David Brauer pointed out on Twitter, it costs at lot more than $650 million to borrow $650 million. Anyone who’s every owned a house knows that they’ve essentially paid for their home twice by the time they’re done making mortgage payments. It’s no different with stadium financing.

I decided to graph that out to see how it looks.

First, let’s stick with CSL’s assumptions that the Vikings’ economic impact to the state comes in the form of taxes on salaries together with sales tax revenues at the stadium: 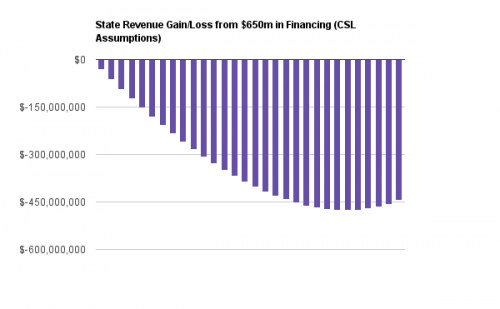 Those purple columns are pointing down because the Vikings would be a net loss for the state every year for 25 years. After that, the state would start to get back a bit more than it puts in, but would end up losing $455 million on a $655 million investment over 30 years. That’s what the Vikings’ assumptions look like against $50 million/yr in debt payments.

But, as I mentioned above, the Vikings’ assumptions are very generous. Clearly, the vast majority of entertainment dollars spent at Vikings games would still be spent in the State of Minnesota if there were no Vikings games. That’s not new revenue for the state, so shouldn’t be counted in an honest debate.

Granted, the Vikings do bring some people into the state, including 206 Vikings season ticket holders from North Dakota. For my assumptions, I’m knocking the Vikings’ contribution to sales tax revenues down 90%, meaning I believe that 90% of the money spent at Vikings games would be spent in the state with or without the Vikings being here.

Here is what that looks like compared to CSL’s stats: 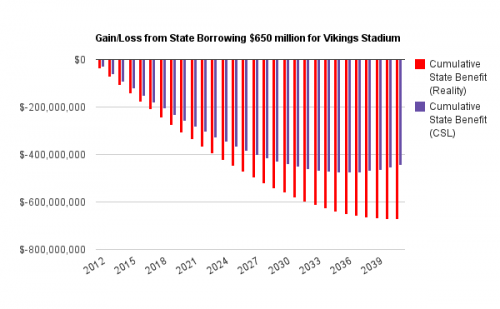 The purple columns are CSL’s assumptions from the previous chart while the red columns are what I assume will be the state’s cumulative losses should the state actually decide to borrow $650,000,000 to help Zygi Wilf build a $1.1 billion stadium for 10 games per year over 30 years. As I see it, at the end of 30 years, we would have lost around $670 million on our $650 million investment.

Granted, we would finally own the stadium debt-free at that point, but as we saw with Sen. John Marty’s attempt to sell the Metrodome to the Vikings for one dollar, a 30 year old stadium isn’t worth much. Can you imagine reaching the end of a 30-year mortgage on your home only to be told that your home is worth less than $1? That’s the kind of deal the Vikings want the State to enter into with them.

This is a major financial hole we could dig for ourselves, leading to a variety of bad financial decisions to fill. Considering the already existing holes in our budget, it’s pretty clear why this is not a high priority for the state.

If you’d like to play around with these numbers, here is a link to them in a spreadsheet, or view them below.