When people start up brand new Twitter accounts and immediately start making ad hominem attacks against me on Twitter, I tend to think they are Josh Hewitt. I don’t know if he’s the guy behind this account yet, but it does mirror his tactics and style.

Here is the latest example from earlier today:

When he first started harassing me, he hadn’t bothered to upload a photo of himself. Once he did, he looked like this:

The photo? That’s a picture of a 17 year old boy in South Carolina.

@johncasher1 popped up on Twitter after I posed a what I thought was a fair request to militant #wilfare supporter, @Vikeologist: 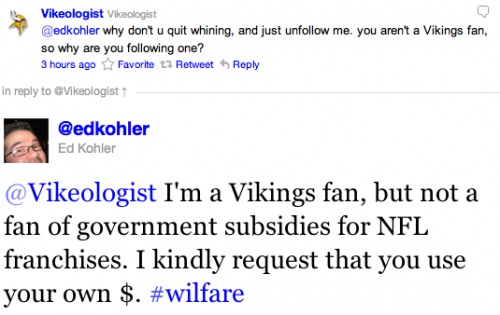 In all seriousness, it’s quite possible to be a fan of a sport, of a team, but not of public subsidies of a $1.1 billion stadium.