Back on October 14th, I did a run through the Standish Neighborhood of South Minneapolis on 32nd and 33rd Avenues along with 44th and 45th Streets. The neighborhood is tucked in between Lake Hiawatha and the LRT with Minnehaha Creek to the south. The church on the corner of 42nd St at 32nd burned down in September. Fire inspectors say it had “several points of ignition”. Natural causes? Not. St. Helena School is located behind the church. It’s a private Catholic K-8 school affiliated with the church. Across the street is Northrop Urban Environmental Learning Center, a K-5 grade school with an emphasis on environmental sciences. I reached the end of 32nd Ave S at 46th Street where a set of tennis courts sits above the Minnehaha Creek. It was a beautiful fall day along the creek. I turned back north on 33rd Ave S, then took 45th Street west to Lake Hiawatha. Then I headed east on 44th St until I hit the LRT tracks. I needed to pick up the last of 45th St East before heading back north on 33rd. The eastern end has a shortcut to the 46th Street LRT stop. At 34th Ave S, I passed a business corner where Twisted Groove tie-dye and batik store is located. At 33rd Ave S, I busted a move north to wrap up my run at Chris & Rob’s Chicago Taste Authority. I’m a fan of their dogs and pizza. 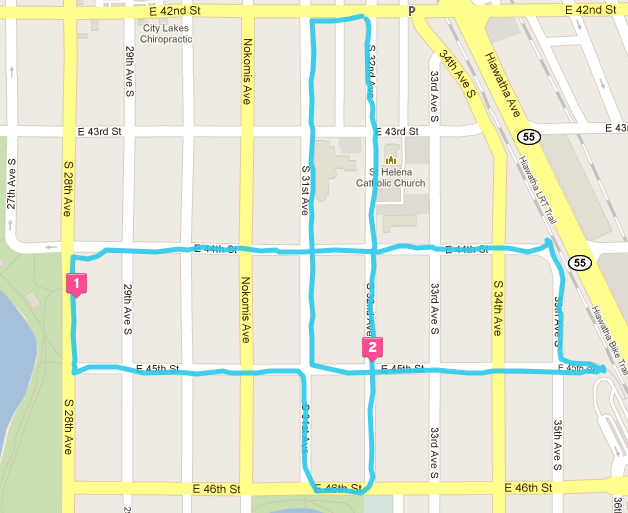