Here is a look at the construction costs of the current NFL stadiums along with the proposed Vikings stadium plan in Arden Hills. All numbers are in 2011 dollars: 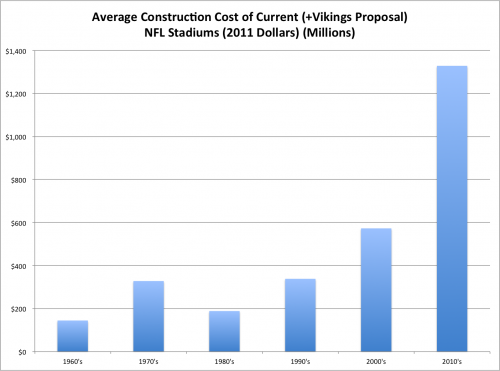 There is no question that the new Dallas Cowboys stadium is superior to the San Francisco 49ers stadium. And, any new stadium built for the Vikings will surely be an upgrade from the Metrodome.

In the end, I don’t really care if the NFL wants to spend many times what they spent on stadiums in the past. That’s their prerogative, since it’s their money, right? Oh, right.

The reason the NFL has been able to continue to build ever more extravagant stadiums while also increasing their profitability is by socializing the construction costs of stadiums. In the mid to late 1990’s, the average public subsidy of a stadium was $175 million. Now the Vikings are demanding $650 million. If you have an extra half a billion dollars of the public’s hard earned money to play with, of course your tastes will change . . . on the backs of the public.

Put anther way, if we stopped giving the NFL money, they would still have plenty of money to build great stadiums. The NFL would not die. Teams would not leave. And we would all have more money available to spend however we’d like rather than shifting it to a handful of NFL franchise owners (aka, The 1%).