The slide below is one of the more interesting pieces of data I’ve seen used by Cory Merrifield with @savethevikesorg and, presumably, by the Minnesota Vikings, considering that the data comes from the Vikings stadium consulting firm, CSL.

It lists recent stadium financing deals with a breakdown of how much private and public money was used to fund the projects. The idea here is to make it look like it isn’t absolutely absurd for the State of Minnesota together with Ramsey County to borrow a combined $650,000,000 and make debt payments on that money for decades. 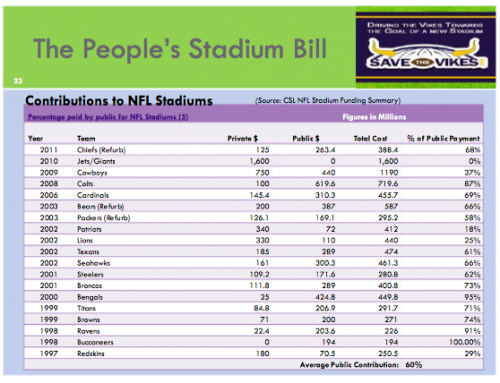 Here are a few things I noticed in this slide:

1. Exorbitant Cost: By sorting those projects by their total costs, we see that the Vikings stadium would be the 3rd most expensive stadium project in the history of the NFL: 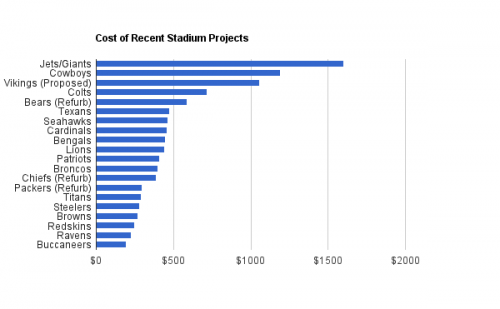 It would be one of three projects that cost more than a billion dollars. The NY project cost significantly more, but the stadium is shared by the NY Giants, NY Jets, and has a 82,566 seat capacity.

2. Unimpressive Private Contribution: Notice the figure at the bottom of the figures Merrifield presents. 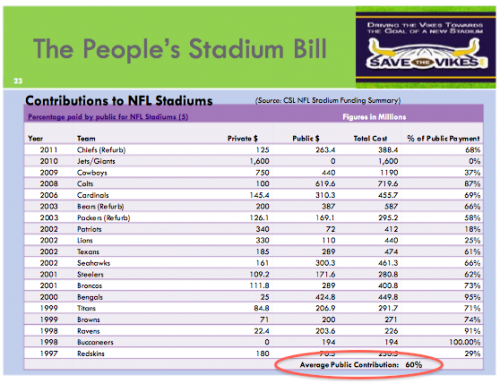 Average Public Contribution: 60%? That’s how Merrifield does the math. To get there, it looks like Merrifield averaged the averages, to make it look like the Vikings proposal was also an average deal that above average Minnesotans should be willing to swallow.

Here is another way to look at that math. If I add up the public and private contributions to the stadium projects on that list, it the public/private share of stadium funding over that time period is almost exactly 50/50:

50% is quite a bit different from 60%. Based on the proposal the Vikings are trying to shove down our throats, that’s a $110 million difference.

Strangely, for some reason the 2003 Eagles stadium is missing from that list. If we add that in, the majority of the money spent on recent stadium financing deals came from private – not public – private sources:

3. Overselling Private Contribution. Here is a chart that I think helps illustrate how twisted the Vikings’ framing of costs really is: 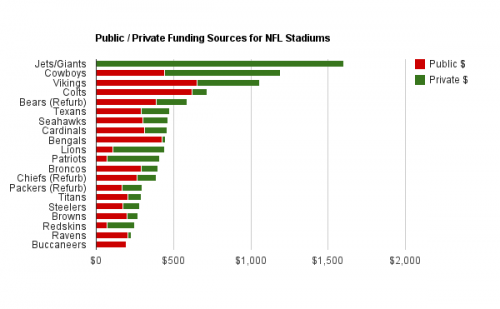 The red lines are the key. While the Indianapolis Colts demanded a much higher contribution from the public than the Minnesota Vikings are demanding on a percentage basis (86% vs 61%) the Colts’ stadium only cost $735 million to build. If Zygi Wilf was simply willing to settle for a stadium that’s nice enough to host the 2012 Superbowl, he could build his stadium without any money from the State of Minnesota. (But wait! The Indianapolis stadium was built in 2008! To be clear, the $735 million figure is the cost of the stadium in 2011 dollars.)

Here is a look at how much money NFL franchises have extracted from the public to date, along with what the Minnesota Vikings are attempting to extract from us: 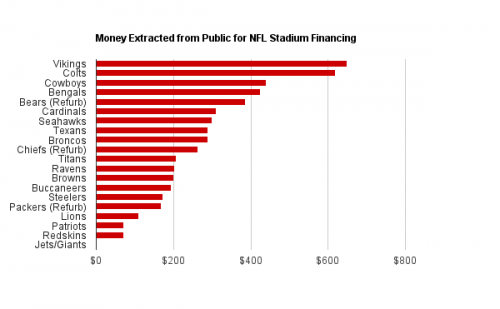 Looked at another way, the average public contribution made toward the stadiums outlined in Merrifield’s presentation has been $249 million, which is far less than the $650,000,000 the Vikings are demanding.

Again, I’m a Vikings fan and believe that the Vikings are an asset to the State of Minnesota. However, that doesn’t justify meeting whatever demands the Minnesota Vikings franchise demands of us in order to keep the team.

While the Pioneer Press’ editorial page may ask “Do We Want the Vikings or Not?” the real question we should be asking is “What price, if any, should the public be willing to pay to keep the Vikings in Minnesota?”

2 thoughts on “How the Minnesota Vikings Mislead Politicians”