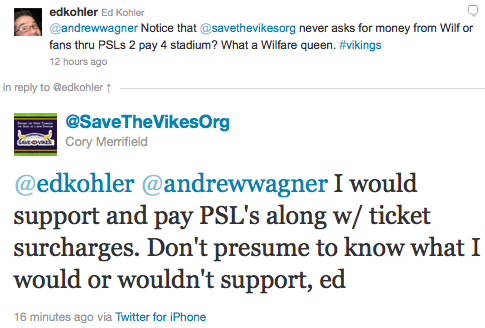 For those of you who are not familiar with Personal Seat Licenses, they are a way that many NFL teams have raised money for new stadium projects by charging for the right for season ticket holders to buy premium seats in the new stadium. At its most extreme, the Dallas Cowboys managed to charge as much as $150,000 per seat for the right to buy the most premium seats in their new stadium, which is why they were able to spend only $440 million of the public’s money compared to the $650 million that Zygi Wilf is demanding from the public up here in Minnesota.

$310 million? That’s $10 million more than Zygi Wilf is currently demanding from the State of Minnesota. Just like that, the Vikings would be able to build a new stadium with no state Wilfare dollars.

By the way, Dallas made it easy for people to pay for their PSLs. They could put 10% down and pay the rest over 30 years at 8% interest, so the Vikings could actually make even more money off financing the PSLs.

If you’re a Vikings season ticket holder, I strongly encourage you to follow Cory Merrifield’s lead on this. Demand your right to buy Personal Seat Licenses. Keep the government out of private businesses like the Vikings. Prove to Minnesota that you’re not Wilfare queens.