Rick Prescott at BallparkMagic.com has an awesome post up about the chances of the Arden Hills Vikings #Wilfare $650,000,000 demand coming to fruition. It’s a great read.

If you read two pieces on the current state of the Vikings stadium debate, read this and this (PDF).

For example, his take on why Wilf doesn’t want to build the stadium on 22 acres like the Metrodome, and is instead demanding 400 acres in Arden Hills for his monstrosity:

But let’s be clear about one thing. It’s not hard to understand why that tract in Arden Hills would be Zygi’s first choice. It’s a ton of vacant land, at the intersection of two major interstates, which somebody else would buy and clean up for him and yet which he would control completely. It’s a developer’s wet dream.

If the stadium were built there, Zygi would be able to extract money from the fan base to his heart’s content. Lots of money. For every little thing. Forever. $100 for a tailgating spot on game day? Count on it. $400 for a room at his hotel? Without a doubt. Just bear that in mind if you ever feel the urge to drool over the current proposal.

Prescott breaks down a ton of reasons why legislators will oppose the Arden Hills site, from lot leveraging existing transportation infrastructure, to a lack of support from the existing business community (How many Fortune 500 companies have headquarters or out of town clients staying at the Days Inn Moundsview Twin Cities North?).

Shoppers in Ramsey buy much less, and will pay much more! Yikes!

And, if that weren’t enough, Ramsey also has a significantly larger percentage of its population living in poverty (16.4%, 2009) than Hennepin (11.9%). These are the people hit the hardest by sales taxes.

Wow, that’s not even close. Ramsey County would pay twice as much for 1/10th the games. Let’s break that down to a cost per game subsidy:

How many people attending a game in Ramsey County would stay at a hotel in Ramsey County, eat in Ramsey County, shop in Ramsey County? Heck, the $7.70 that Tony Bennett is offering to extract from Ramsey County may actually benefit Hennepin County since there are so many hotels in an entertainment district that out-state and out of state fans may choose to stay in while visiting Ramsey County for 3 hours while in the Twin Cities. Thanks, Tony & Jose! I hope your constituents agree with how you plan to force their tax dollars be spent.

Beyond dropping some really interesting perspectives on whether the Arden Hills site has any chance of actually happening, Prescott dropped a very cool link to a PDF of a report from Albersman Armstrong, where they provide serious analysis of why downtown Minneapolis is, by far, the most appropriate site for a new Vikings stadium, and specifically the Farmer’s Market site.

The report has some awesome graphics, including this one breaking down what the area around a stadium near the Twins ballpark could turn into: 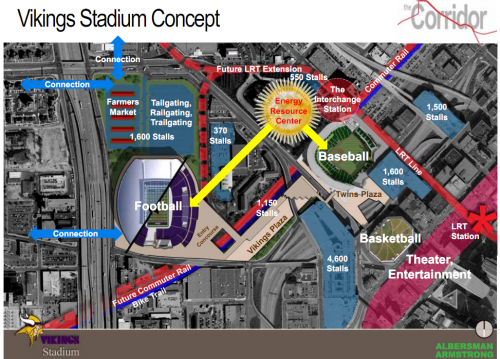 The report also gets into why it makes more sense to support a Vikings stadium next to the Twins Stadium rather than next to or as a replacement on the footprint of the Metrodome. This would create additional concentration in an entertainment district, while opening up the Metrodome area for new developments, such as increasing residential, health care facilities, and green space: 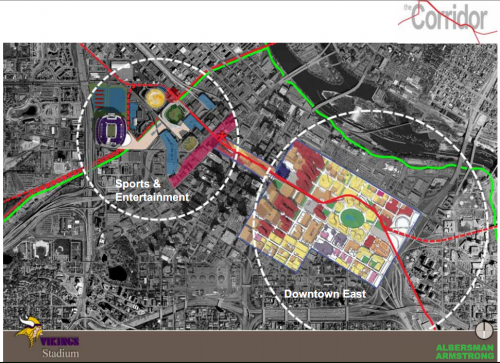 This is great stuff. The justification is so much better than what the Vikings have been providing for the Arden Hills site. As far as I can tell, the justification for the Arden Hills site is to come up with a location that allows Zygi Wilf to extract as much publicly subsidized land (400 acres vs. 34 acres for a downtown venue) for the highest public subsidy any NFL franchise has had the gall to ask for do date.

Again, I fully support Zygi Wilf’s right to build a new building for his business wherever he wants, with his business’ money. But, when he starts demanding that the public pay for a portion of it . . . not just a portion of it but well more than half of it, the public starts to have some serious say into what that building looks like and where it should go.