Which made me wonder: Wow, what did I say to him that made him so angry? This:

And, what was I referring to in my tweet to @norseforce40? This:

Which made me wonder what @norseforce40 tweeted that led to him getting blocked by Rochelle Olson. Here’s a sampling of @norseforce40’s work: 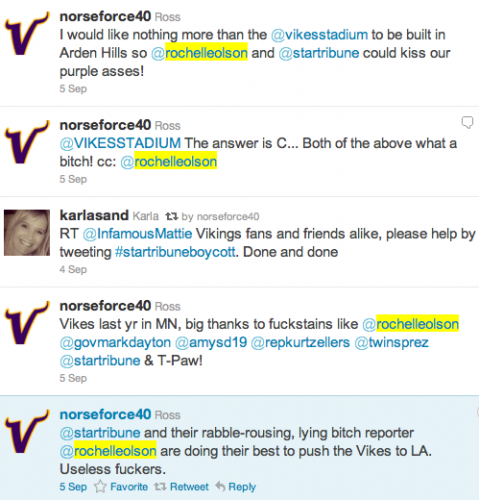 This is the kind of stuff that makes me thing about the best case scenario for a new Vikings stadium deal:

1. Zygi gets serious, and gather up private financing to build his new stadium.

2. The Vikings stay in Minnesota, but send the current Wilfare queen fans to Los Angeles.

2 thoughts on “An Embarrassment to #Vikings Stadium Wilfare Queens”