I recently took a look at online search demand over at Google Trends for the term “Vikings” to get feel for how much people care about Minnesota’s current local NFL team. I managed to uncover a few interesting nuggets.

Vikings searches spike on Sundays, but people do search for the term “vikings” throughout the week: 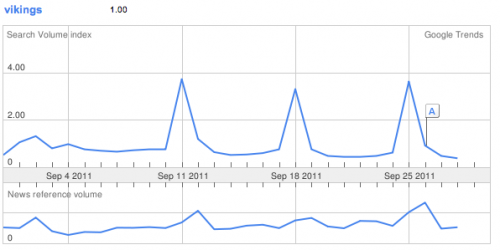 Google Trends also reports which cities have the highest demand for a search term. Here are the highest cities within Minnesota: 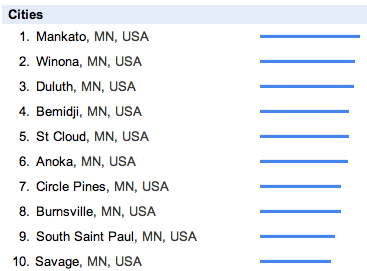 It’s interesting to see that 4 of the top 5 cities in the state by population aren’t on that list. Do Minnesotans not care about the Vikings as much in Minneapolis, St. Paul, Rochester, or Bloomington as Minnesotans in Mankato, Winona, or Duluth? Perhaps.

Here is a map of where the top-10 cities are located. If you click a marker, you’ll see the city’s name and ranking:

It’s also interesting to note that NONE of the top-10 cities on that list are in Ramsey County. You know, the county that Zygi Wilf wants to see borrow $350,000,000 and make debt payments on that for decades through a .5% county sales tax (a 7% increase over the current sales tax paid in the county).

Additionally, none of those cities are in Hennepin County, where the Metrodome resides. It’s almost as if people can enjoy a professional football without having it in their back yard.

To get a sense of how popular the Vikings are, I compared them to football in general: 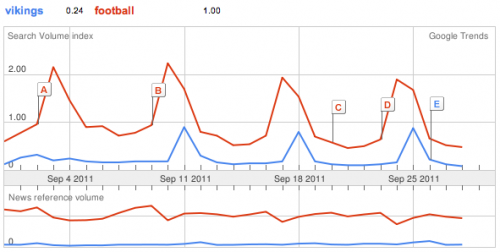 It also looks like the average Minnesotan cares more about football on Saturdays than Sundays. Once the Vikings regular season started, it appears that some of the Saturday “football” demand shifted to Vikings Sundays.

Here is a look at the Minnesota cities where “football” is popular: 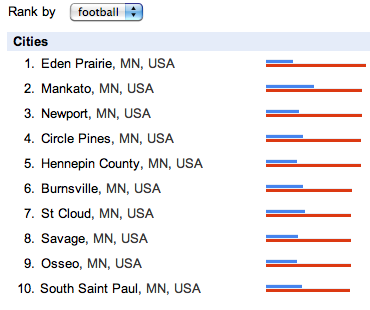 Again, none of these cities are in Ramsey County.

If I lived in Ramsey County, I would wonder why commissioners like Tony Bennett are trying to force county residents to pay for something that has a negative return on investment, and doesn’t even seem to have a high demand compared to other communities in the state.

This, to me, helps makes the case for state wide funding over putting such an insane burden on a single, small county like Ramsey. But, as we know very well, the state does not have $650,000,000 sitting around. The state just shut down due to arguments over how much to cut health care, K-12 education, and higher education programs, and ended up with a budget that borrowed from schools and shifted some of our tax burden on local property owners. That does not sound like a state that’s in a position to make debt payments of more than $2 million per month for decades in order to allow Zygi Wilf to build a 21,000 car parking lot in Arden Hills, and for Vikings fans to save $45 per ticket per game.