Did Lester Bagley pen the St. Cloud Times’ editorial in favor of Vikings stadium welfare? Their editorial, “Our View: Give Vikes an answer on stadium this fall” sure reads like it.

Here are some examples:

No matter your opinion about the Minnesota Vikings’ on-field performances this season, the team is finally making all the right moves in its effort for a new stadium.

Personally, I’d count “paying for their own stadium” among a “right move” that the Vikings could make, but have refused to do. Heck, they haven’t even offered to pay for half.

First, with Sunday’s game against Tampa Bay complete, please realize the Vikings have only seven more games in the Metrodome until their lease expires. (Not counting playoffs, of course.)

“Please realize?” Remember, this is a St. Cloud Times editorial. Okay, noted. I do like the optimism related to potential playoff games this season.

Many Minnesotans probably don’t realize this because the Vikings are taking the diplomatic high road and refusing to play the “countdown crisis” card to force legislative action.

I also need to assume that the St. Cloud Times hasen’t followed the posts to the official Vikings funded “grassroots” organization, Minnesota Momentum’s, Facebook page, where they have posted stories like this: 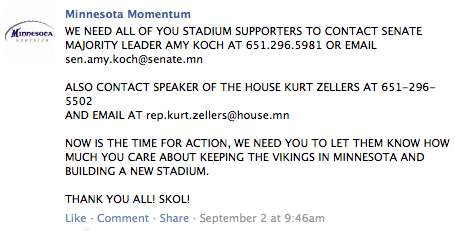 NOW IS THE TIME FOR ACTION? That sounds rather countdown crisis-like to me.

Or, how about this example, where the Minnesota Vikings posted an article suggesting that our legistlators are “failing to lead” by not making Vikings Wilfare their #1 priority:

This one cracks me up:

How many big businesses would act like that if they knew they didn’t have a place to work less than six months from now?

Is the St Cloud Times editorial board really that misinformed? Do they somehow not realize that all the Vikings need to do to have a place to work is sign an extension on their lease at the Metrodome. Let’s be clear: The Vikings are NOT being kicked out of the Metrodome at the end of their lease. In fact, should a new stadium deal actually be approved, the Vikings would continue playing in the Metrodome for years while that facility was built. Again: the Vikings are not facing homelessness.

Bagley succinctly and professionally stated that the Vikings want to stay in Minnesota and that they are willing to work with the state and Ramsey County to hammer out stadium details.

Put another way, Bagley succinctly and professionally stated that the Vikings would be happy to move to Ramsey County if Ramsey County is willing to extract more than $300 million (plus interest) out of their community (on top of what Ramsey County residents would be on the hook for from the state).

Stadium-weary Minnesotans would appreciate such finality, as would voters and legislators who know this state has higher priorities to address.

I’m a stadium-weary Minnesota who doesn’t care if we reach finality on this issue.

Given enough time, perhaps Zygi Wilf will decide to write his own check for a new stadium in Minnesota? Or, perhaps people who care more about Minnesota than a guy in New Jersey will buy the team from Wilf, then build a stadium here?

Or, perhaps hardcore Vikings fans will figure out a way to generate enough revenue for Zygi that he can finance the stadium without welfare?

Most importantly, the soon-to-be-leaseless Vikings must have that answer, and soon.