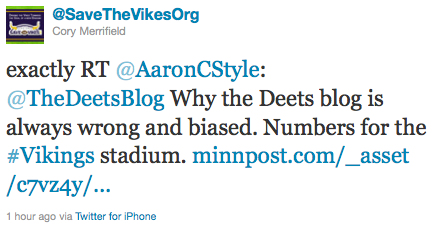 I learned via Twitter than I am always wrong and biased when it comes to Vikings stadium related issues. Now, granted, I certainly have a bias against providing welfare to a welfare queen like Zygi Wilf so he can build 21,000 parking places, but I try to at least get my facts straight.

The example of my ignorance linked to above has revenue projections for the Vikings stadium proposal. That was initially included in a MinnPost article from from May 2011 written by Jay Weiner. At that time Weiner wrote “We scratched our head about this.” before mentioning that the data comes from sports business consulting agency — CSL International. As in, these are the people you turn to if you need a rosy picture painted.

Weiner closed his article with this:

Take a look at the chart, and see what you think.

Then, take your whacks.

Which is kind of similar to what I tweeted about this last night:

Here is a quick whack at this.

First, the numbers CSL put out (for each of the spreadsheet screenshots below, click to enlarge): 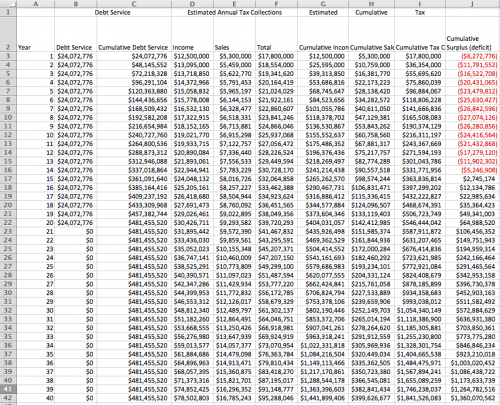 Under that model, the public investment in the stadium breaks even in 15 years, and nets a $1.3 billion gain in 40.

Now, for some whacks. First, money spent in the stadium is money that would likely have been spent elsewhere in the state. For example, ever walked into a hardware store during a Vikings game? Since that revenue isn’t NEW revenue for the state, but revenue shifted from one business to another, it seems strange to count it, so I’m backing that out: 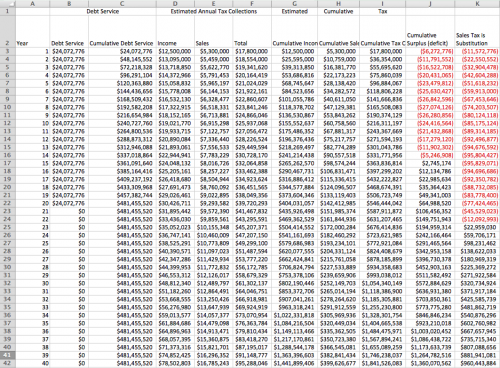 Under this model, the break even is pushed out to 25 years, with a 40 year net gain of $960,000. For more on this assumption, check out this post by Paul Udstrand.

The CSL model uses 20 years of $24 million/year of debt payments as the cost of the stadium to the state. Instead, why don’t we look at the full cost to the public (state and Ramsey County) which is more like $28 million per year for 28 years: 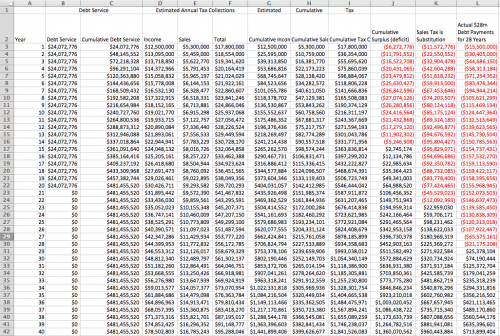 As I mentioned in the sales tax assumption, if the Vikings weren’t playing in Minnesota, the money spent at the stadium would surely be spent elsewhere. And when the money moves, so do the employees. While it seems fair to count state income taxes on players’ salaries, counting concession, security, and maintenance workers toward the value of the stadium seems like another revenue shift to me. This also assumes that NFL players will average 5% raises every year for the next 40 years. 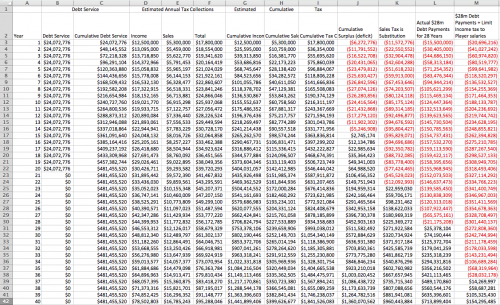 Now, if I look at the history of sports stadiums, I think we need to take at least one more whack at this model: 40 years? Seriously? The Vikings played for 20 years in their first stadium, and started complaining about their second stadium after 20 years. At 30 years, they are now demanding welfare payments for a new one. So, assuming anything longer than 30 years seems rather ridiculous to me, so let’s trim 10 years off all of those assumptions:

Toss in the additional $50 million in transportation costs associated with everyone driving to Arden Hills rather than downtown Minneapolis (and, statistically, one road death), and this starts looking like one step forward, two steps back to me. As in, we will never see a positive return on the money welfare queen, Zygi Wilf, is demanding from us.

Also, if we assume, like the Vikings organization may, that break even would be a laudable goal, consider this: That means that the Vikings manage to carry their own weight while contributing nothing to the economy. Break even means that they didn’t contribute a single tax dollar to cover the costs of schools, roads, bridges, higher education, etc.