While on the subject of fake grassroots organizations, it’s worth giving Minnesota Momentum a plug. But, before doing so, check out this description of what “grassroots” actually means from Wikipedia:

The term implies that the creation of the movement and the group supporting it are natural and spontaneous, highlighting the differences between this and a movement that is orchestrated by traditional power structures.

Now, take a look at the Twitter bio for Minnesota Momentum:

See the URL? Vikings.com? That’s strange. How many grassroots organizations are tied to tightly to a single corporation’s private interest in extracting public welfare?

Another way to look at this is to check out who owns this “grassroots organization’s” domain name, minnesotamomentum.com: 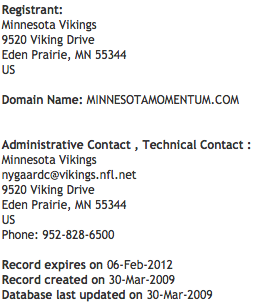 Here is how he describes the work he does for Minnesota Momentum:

When you think of grassroots organizations, do you think free food and free raffles? That seems like the opposite of what I generally expect to see. Usually, it’s “hey” could you chip in to help cover the costs of the bagels? We’re having a silent auction to raise money as well. But things are a bit different at Minnesota Momentum’s grassroots organization, where they have catering and giveaways:

Free Community Breakfast this Friday
The Minnesota Vikings and Minnesota Momentum will hold a free community breakfast on Friday, May 8, at The Stadium Sports Bar and Grill in White Bear Lake.

Along with a full breakfast, members will receive an exclusive Vikings stadium update, as well as a chance to win lower level tickets to the Vikings 2009 regular season game versus the Baltimore Ravens (October 18). Autographed team items will also be raffled, and members will meet former Vikings great “Benchwarmer” Bob Lurtsema.

What
A free breakfast and an official Minnesota Vikings stadium update. Team officials will also hold a raffle to give away two (2) lower level tickets to the Ravens at Vikings game on October 18, 2009, as well as autographed team items.

Giving stuff away on Twitter is another way to build support for Vikings stadium welfare:

So, by giving away free food, free autographed footballs, and free tickets to games, the Vikings have managed to build a Twitter account with 2,900 followers as of this writing. What do they do with those followers? Ask them to lobby our legislators for stadium welfare on the Vikings’ behalf:

Personally, I’d rather not see corporations running fake grassroots organizations in an attempt to extract hundreds of millions of public dollars from a cash strapped county and state for private profit. It comes across as a very dishonest approach to public policy to me.

Here is an example of this supposed grassroots in action parked in front of the state capitol:

Looks like Zygi Wilf, Lester Bagley, and Jeff Anderson have enough sense not to stand out there in expensive suits, begging for $600 million in welfare payments. Instead, they encourage this guy to take a vacation day from work so he can beg for them.

Why are The Vikings Doing This?

And, again, as a reminder to Vikings fans, if the stadium welfare proposal presented by the Vikings organization made smart political sense, why would the Vikings have to go to such great lengths to attempt to manipulate our elected officials into supporting it? If the plan made financial sense, it wouldn’t take an army of fake grassroots support to convince politicians to support it. They know how to count money and count votes, so if the money made sense, the votes would be there.