It’s not that I don’t trust Vikings stadium welfare queen, Cory Merrifield, it’s just that I can’t figure out why he appears to be making stuff up about me. For example:

Frankly, I’m not sure what he’s talking about. Have I ever suggested that Zygi Wilf is asking for one billion dollars from the public? Perhaps Cory Merrifield doesn’t understand how to read stacked bar charts like this one: 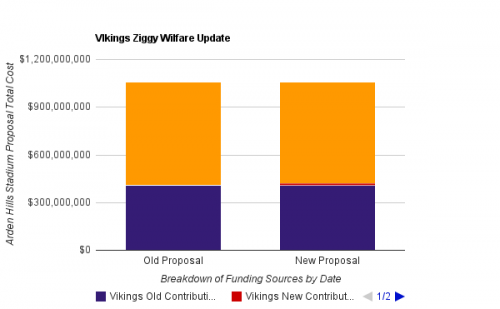 Cory, in case that chart didn’t make sense to you, here is another shot at explaining it: The purple and red portions are what Zygi Wilf has offered to pay toward a stadium for his private business. The part in gold is the welfare he is requesting.

Seriously, if I’ve ever suggested that Wilf is asking for a billion dollars, please point me to where I said that so I can correct it immediately. I don’t want to mislead anyone about how much of a welfare queen Zygi Wilf is attempting to be.

6 thoughts on “What is Cory Merrifield from @SaveTheVikesOrg Talking About?”