Yesterday, the Minnesota Vikings / Zygi Wilf welfare queen supporters got all worked up on Twitter about an article written by Rochelle Olson with the StarTribune that sheds some light on Wilf’s Arden Hills real estate development plans beyond a Vikings stadium. Apparently, Wilf is asking for nearly twice the land he needs to build a football stadium in order to build additional real estate projects at taxpayer expense.

A red circle on a map has become the latest obstacle that Vikings owner Zygi Wilf might have to overcome to win support for his proposed stadium in Arden Hills.

This lead to some harsh words on Twitter from the Vikings’ newly promoted Director of Corporate Communications, Jeff Anderson: 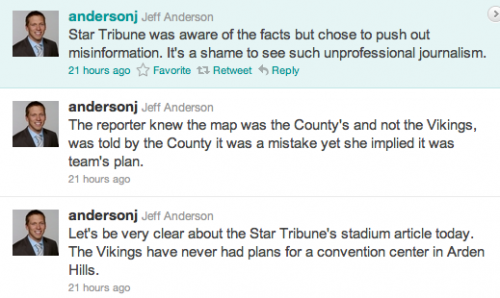 It’s not surprising to hear a subject of a story disagree with some aspect of a story written about them, but one thing that I find particularly strange about this situation is that Rochelle Olson isn’t the only person who reported this. In fact, Dave Orrick and Frederick Melo with the Pioneer Press reported the same thing earlier in the week:

Wilf, a real estate mogul who has built homes and businesses in most of the 50 states, ducked a question about who would control development rights in two areas north and south of the stadium. He said his primary focus was the stadium itself and that those sites would take five to 10 years to develop.

On maps distributed to each lunch table, the two spots are designated “potential corporate campus” and “potential convention center/hotel complex.”

In all, the Vikings would occupy 430 of the site’s 2,370 acres. The stadium would border the county’s Rice Creek Northern Regional Trail as well as a protected wildlife corridor and some 1,700 to 1,800 acres of army training land not included in the proposed deal.

The last paragraph just above this one seems to need one clarification: It sounds like it’s not the Vikings but the Wilf’s real estate business that would occupy 430 acres of tax subsidized Minnesota land in Arden Hills. The proposed stadium, with its insane 21,000 parking spaces, would only take up 230 acres of that huge parcel.

Vikings welfare queen supporters, including SaveTheVikes.org’s Cory Merrifield, were quick to call for a boycot of the StarTribune.

Apparently, in Cory Merrifield’s twisted world view, the reason the StarTribune published that piece was because of a financial bias:

Were the three reporters from two competing newspapers wrong in their coverage of the proposed plans for the Arden Hills site beyond a Vikings stadium? That doesn’t seem likely.

Which makes me wonder: Why would we give a guy in New Jersey hundreds of acres of the State of Minnesota beyond what he would need to build a stadium (a stadium he doesn’t need, but wants)? If he needs 230 acres to build a stadium, shouldn’t the discussion be for 230 acres?

Also, why would we want to spend taxpayer dollars to build 21,000 parking places in a distant suburb to support 8 home games a year when we could use a perfectly good stadium that is surrounded by parking, bus lines, and an expanding light rail network? (aka. The Dome is Home!)

The Arden Hills Vikings Stadium plan seems way too stupid to support with public dollars, but is just fine if Zygi Wilf is willing to spend his own money to build it.

3 thoughts on “The More We Learn, the Uglier the Arden Hills Vikings Stadium Proposal Looks”