Could someone help me figure this one out?

The consent agenda item awarding Don Allen $15,000 for his horrible marketing pieces (hidden under the initials DWRA2) describes the contract like this:

DWRA2 contract to provide video production services to the Office of Communications for the period November 23, 2010 through June 30, 2011. The contract is late due to a misunderstanding of contract processes

But when I take a look at Don Allen’s LinkedIn page (you may need to be logged in to LinkedIn to see the full page), he states that he has only been a consultant under the name DWRA2 since January 2011:

Which makes me wonder: How does an organization like the Minneapolis Public Schools decide to hire someone to do work before they’ve even come up with a name for their consulting firm? Who within MPS makes decisions like this?

It’s possible that Don Allen leaned on previous work experience during his unsolicited pitch in order to win the contract. One example of that might be Go Virtual Media. Don Allen appears to be the vice president of this organization. Actually, it looks like he is the Vice President of the umbrella group that includes Go Virtual Media called Virtual Global Media Group:

Here is how this organization Don Allen is involved with describes itself on its website (emphasis mine):

Strangely, Don Allen’s LinkedIn profile makes no mention of Go Virtual Media or Virtual Global Media Group. In fact, Don Allen’s online resume at LinkedIn is extraordinarily truncated, with vague references to work done over the past 18 months. That’s it: 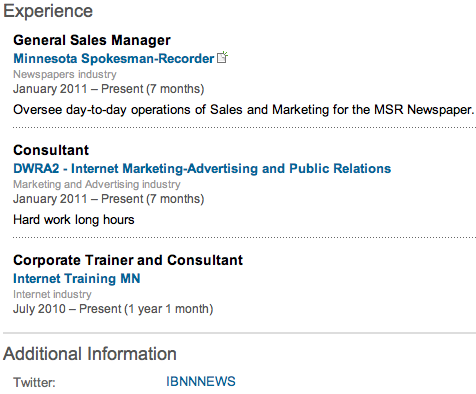 How does an organization like the Minneapolis Public Schools end up hiring a company before it exists?

3 thoughts on “Did the Minneapolis Public Schools Hire a Company Before it Existed?”