Here is an example of the MN GOP blowing off what I consider to be a legitimate policy question related to shutdown negotiations. First the question I asked Kevin Watterson:

I waited a bit. Then a bit more. And checked @kwatt to see if he had gone offline. Nope. He was still online Twittering away and talking politics: 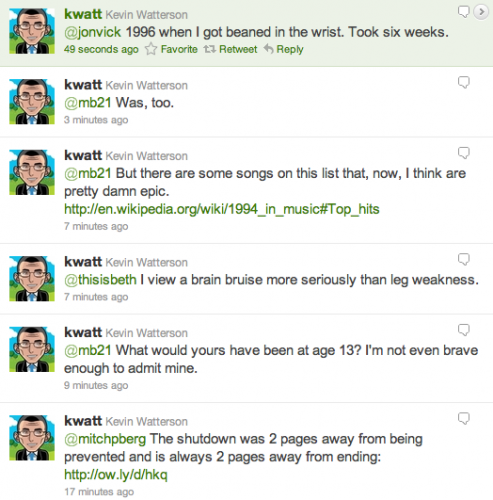 Which brings us back to this Tweet from @kwatt:

At that point, Kevin Watterson confirmed that the MN GOP has lost the ability to make a rational argument. They are not opposing spending for a specific government service. They aren’t saying that a specific taxpayer funded project is wasteful. They are simply saying that government is bad without providing a specific example to back up their claim.

This about this: If the State of Minnesota announced that everyone could have jet packs if we raised taxes by 1%, the MN GOP would oppose it. JET PACKS! Why would anyone oppose jet packs? Because the MN GOP has decided that they don’t want to listen to rational arguments justifying state spending or make rational arguments justifying cutting specific spending items. Instead, they want to cover their ears and pretend that cutting spending has no societal costs.

To be clear, this post isn’t coming from a huge Dayton supporter. On October 19th, I wrote a post titled “ANYONE BUT TOM EMMER” that made my position clear.

That’s such a strange tweet. The programs paid for by the Dayton plan are obvious. They don’t provide revenue for yet to be named programs. They simply fund programs that already exist. On the other hand, the MN GOP plan cuts programs without specifically naming which programs should be cut and by how much. I guess you could call that a wet noodle spending cut, but a better name for it would be a cowardly cut in spending to support people making more than $1,000,001 per year after deductions.

6 thoughts on “Blown Off by @kwatt From the @MNGOP #mnshutdown”