Just over a year ago, I started snapping up some deals on Groupon and other related services, so it seems like a good time to look back on whether these deals are working for me or not. First, I went to Mint.com and looked up my spending on daily deal services: 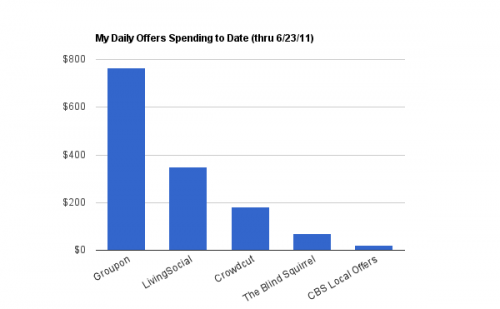 I’ve spent $1,387 on daily deals over the past year. Since deals tend to be 50% off deals, it’s fair to say that these programs are saving me around $100/month. That is, if I’m spending money on things I would have purchased anyway AND being sure to redeem the deals I’ve purchased.

On the redemption side, I’ve had a couple purchases expire, so my net savings are around $50 less than what I’ve spent on offers. I’ve learned not to buy deals based on optimism, such as kayaking on Lake Calhoun.

Which also ties to the “would have purchased anyway” mindset. Aspirational deals are not a savings in the same way as getting a deal on something I would have done anyway. That said, if an aspirational deal entices me to try something cool, that’s a really good deal.

Daily deals have definitely gotten me in the door of places I hadn’t been to before. Most recently, Sporty’s Pub on Como Ave SE, where I tried their deliciou Hypocrite burger (a veggie burger with pulled pork and bacon). I will be back.

While Groupon is my current top daily deal source, that’s partly because they were the first of these services that I joined. Over time, I started picking up more offers from LivingSocial, and lately it looks like CrowdCut has been my top source for daily deals. In the case of CrowdCut, I think this is because they’ve had a lot of deals near the U of MN, which is geographically convenient for me. I haven’t seen much of interest from The Blind Squirrel yet. It seems like they are a little thin on local offers at this time. CBS Local Offers has a bit corporate for my taste. Glamour Shots? No thanks. Dealstork has been kicking out a lot of spa, photo framing, and fitness center offers, which aren’t really my thing. Perhaps they’ll reach a point where they can better target their offers based on age/gender/location?

One thing that I find interesting is that there are a handful of restaurants kicking out offers often enough that now only consider going to their locations when I have a deal. I tend to spend well above the offer’s face value in those cases, and bring others along, so the numbers may still work out for those places. Not sure.

7 thoughts on “My Daily Offers Spending”