Last night I sent out a tweet asking for an update on the fundraising efforts of SaveTheVikes.org, who seem to be in favor of the corporate welfare for a new stadium for Zygi Wilf:

That got a response from a concerned Twitterer:

We exchanged a few tweets about how my tweet wasn’t directed to @savethevikesorg, but was about their ongoing campaign for corporate welfare.

As the conversation progressed, @DubbsTravels seemed to agree with my on policy by differ on approach: 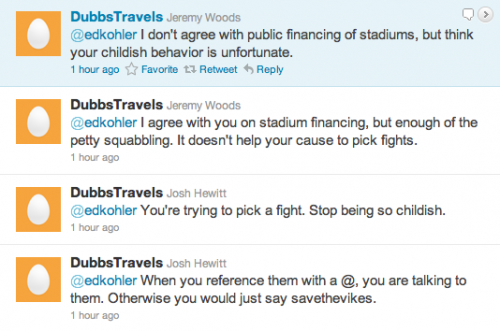 Now, take another look at the above screenshot. See anything else going on there? Check out the name associated with the Twitter account in the bottom two tweets vs the top two tweets. Yes, during our conversation on Twitter, this Twitter user changed their name from Josh Hewitt to Jeremy Woods. 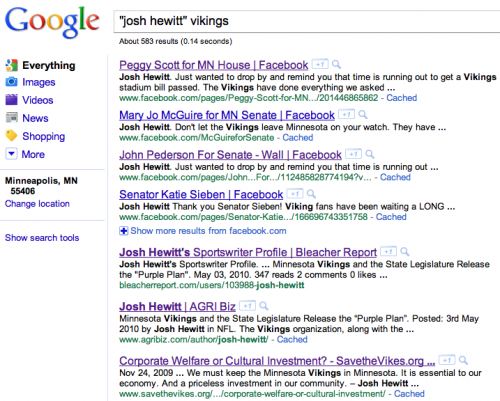 Would you look at that. It turns out that Josh Hewitt is quite the fan of corporate welfare for the Minnesota Vikings. For example, here is an excerpt from a guest post he wrote for SaveTheVikes.org:

In the end, building a new stadium is an investment we have to make. We must keep the Minnesota Vikings in Minnesota. It is essential to our economy. And a priceless investment in our community.

We “have to” spend public dollars to supplement the capital costs of a private business? No, Josh, we don’t.

Also, it’s interesting to note that this same Josh Hewitt is @vikesstadium on Twitter. This is the guy who, when attempting to tweet anonymously, said he was against public financing for a stadium. 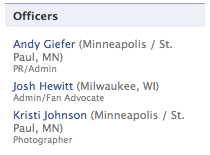 Coincidentally, one of the Officers on the Save The Vikings Facebook Group is, you guessed it, Josh Hewitt.

It looks like Josh has also been busy spamming every legislator’s Facebook wall in support of the Vikings Stadium Welfare proposal: 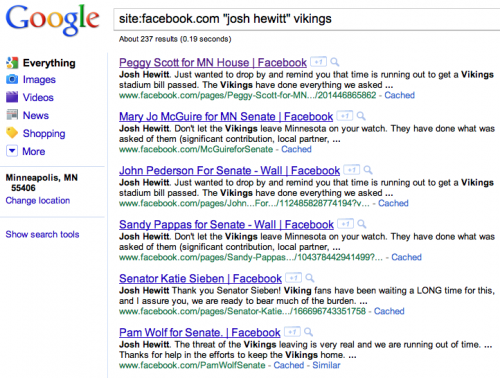 The last tweet I sent to Josh Hewitt / Jeremy Woods / @DubbsTravels was this:

As you can probably imagine, that tweet did not receive a response.

Sadly, it appears that the Save the Vikings stadium welfare supports is willing to turn to deception to attempt to suppress opposition to their handout. I guess when a rational argument in favor of public financing of a depreciable asset for a private company can’t be made, one may be desperate in support of their personal want (not need).