During a short debate on Twitter about the taxpayer dollars MN Congressman Chip Cravaack is wasting by spending $1,000 on a car lease, Erik Leist decided to change the subject to solar powered trash cans. Now, understandably, as a Chip Cravaack supporter, he probably doesn’t want to talk about Chip Cravaack’s wasteful spending of taxpayer dollars (the first result on Google for the SUV Cravaack leases shows that it could be leased for $152 less than he’s paying, and I think we can assume that US government has decent credit).

Now, on the solar powered trash can scene, here is what Erik Leist had to say:

Which, one would think, would generate at least a little bit of Googling before a response like this from Erik Leist:

While this may make intuitive sense to anyone willing to think a bit harder than Erik Leist, you don’t have to rely upon intuition. Lodi, California has solar powered trash cans and has run the numbers (PDF): 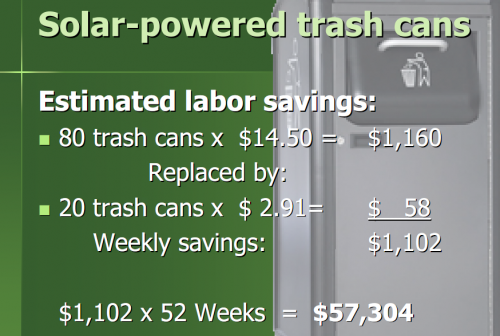 Since fewer trips are being made to each trash can, a significant amount of fuel is also saved. Here are the numbers: 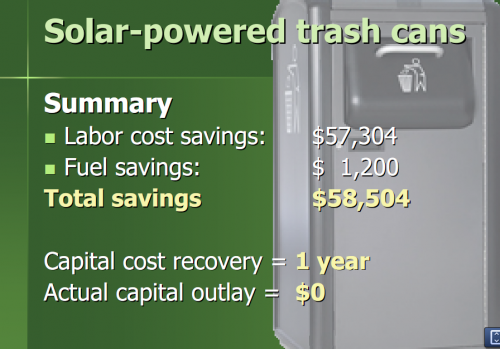 Hmm, that seems like a pretty darn good investment to me. Waste of taxpayer dollars? Um, not so much.

I’m not sure how someone like Erik Leist, who claims to be fiscally conservative, could be so wrong on something that’s so easy to quantify. Obviously, the labor costs of dealing with trash collection trump the cost of solar powered trash compactors over time.

Seriously, if you claim to be a fiscal conservative, be prepared to back up your claims, whether it’s related to solar powered trash compacting trash cans or exorbitant taxpayer funded leases on sports utility vehicles for Chip Cravaack.

One thought on “Are Solar Powered Trash Cans a Good Investment? cc @ErikLeist”