Donald Allen raised an interesting theory in the comments of an earlier post, where he suggests that the reason I write about him is for blogging profits. As I understand it, he seems to think that I’m profiting off of him due to the amazing amount of traffic this blog receives when I blog about him.

Donald Allen
March 9th, 2011 at 8:21 pm
I can’t believe your actually trying to get traffic to your blog this way – how funny, but brilliant.
…
I hope you make some money

While I do run ads on The Deets, Don is delusional if he thinks the reason I write about him is for the money I make from it. Here is some data to back up that statement:

Here is another way to look at the data: 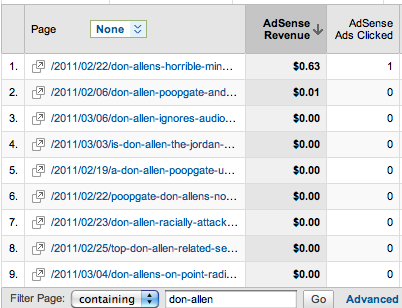 That is a post by post breakdown of the revenue generated from the posts I’ve written about Don. One person clicked on one ad on one story, which generated 63 cents. And the ad impressions in aggregate have made me a penny off of Poopgate.

And, just in case things aren’t crystal clear already, I’m donating the 64 cents I’ve earned to the TC Daily Planet (following Erica’s lead). However, since a 64 cent donation would be largely eaten up by merchant fees, I’ve nudged that up 100X: 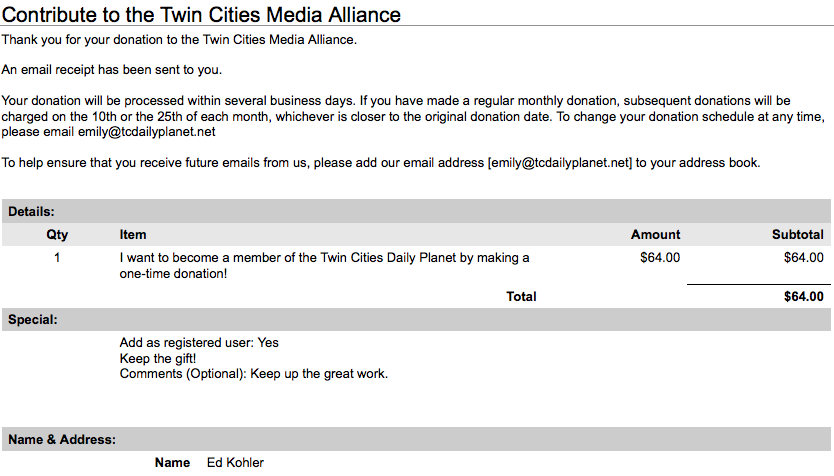 If I’ve followed this chain of events correctly, I think it breaks down something like this:

I hope this clarifies things a bit.

10 thoughts on “Do I Write About Don Allen for the Money?”