There were a few characters lurking in the back row of the galley of the Johnny Northside trial yesterday who seemed to be, well, lurking.

They seemed to take copious notes, but didn’t seem to be affiliated with any media sites that have written about the case. However, there may be one exception to that. The Jordan Hawkman blog. That blog, which I mentioned last week, has done some reporting on the case. Sadly, rather than report the facts as they saw them, they made up statements about one of the case’s witnesses by saying she was kicked out of the courtroom for texting when, in fact, she was removed from the courtroom when the trial began because she was a witness.

Could one of those lurkers be the anonymous Jordan Hawkman? Well, here is an interesting coincidence worth pondering. One of the lurkers looked one heck of a lot like notorious North Minneapolis slumlord, Paul Koenig of PAMIKO Properties. 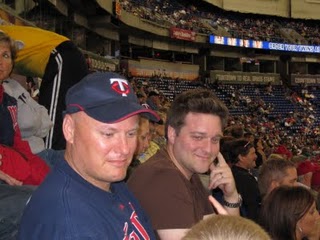 That’s Paul Koenig on the left in the Twins hat. More pics of Koenig can be found here and here.

In January 2010, I wrote briefly about Koenig’s crumbling slumlord empire, which included a boatload of properties in both North and South Minneapolis at the time: Banks own a lot of those properties now. And Koenig is being sued by MinnWest Bank over this fiasco. This is the same Paul Koenig who was called “The One-Man Housing Crisis” by CityPages last year, and the StarTribune generously described Koenig a “Lax Landlord” in a March 2010 piece:

The Lees’ home is one of more than 50 Minneapolis rental houses formerly owned by Pamiko Properties LLC, whose recent financial collapse highlights a concern of housing activists: The city issues rental licenses to landlords without doing background checks.

If one had been done on Pamiko, it could have revealed that owner Paul Koenig filed for bankruptcy in 2000, hadn’t paid tens of thousands of dollars in taxes and had been involved in an earlier failed real estate venture on the North Side.

Now, assuming that Paul Koenig was who I saw in the courtroom yesterday, that could bring to light an interesting angle on who may be behind the notorious Jordan Hawkman blog. While Don Allen is probably involved at some level, the posts do tend to focus on attacking the kind of people who attack slumlords. Namely, John Hoff, Eric Johnson, and Jeff Skrenes. People who’ve blogged the dirt on Paul Koenig’s crumbling slumlord empire, and the impact that’s had on their community.

That would explain how the Jordan Hawkman blog has covered courtroom proceedings, and why JHG had no friends in the galley.

If you happen to be down at the courtroom today (Government Center, Room 655C), keep an eye out for Mr. Koenig. If you see him, ask him what he’s done for North Minneapolis lately.

15 thoughts on “Was Paul Koenig of PAMIKO Properties at the Johnny Northside Trial?”