There are some really strange people on the internet. Among the strangest I’ve seen are employees of yellow pages directory spammer, Yellowbook.

For example, I’ve recently been receiving harassing comments on a YouTube video I posted in July, 2009 titled “Yellowbook Yellow Pages Opt-Out FAIL” where I collected Yellowbooks that my neighbors hadn’t bothered to bring into their homes and returned them to our local Yellowbook office in Mendota Heights. This was inspired by Yellowbook failing to honor their promise to STOP delivering their books to me. For those who haven’t seen the video, here it is:

A new commenter has been lobbing some bombs at me on YouTube. Here is the latest: 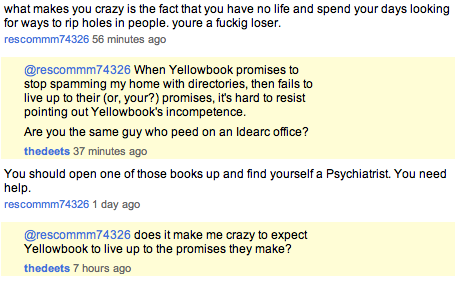 As one might imagine, the kind of person who takes the time to attack me based on the content of a video like that probably has some sort of connection to the yellow pages spamming industry, and probably to Yellowbook specifically.

So I Googled the username, rescommm74326, and things got interesting. 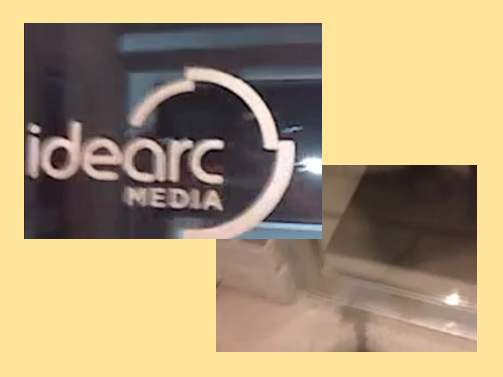 Those screengrabs are from a video titled “Idearc Media pissed me off. So I pissed on them” which has since been deleted from YouTube. To be clear, that was done by an adult.

Now, at the time, I figured that this was someone I could identify with. A print yellow pages spam hater who takes things further than I would. But, after watching this video from the same YouTube user, rescommm74326 . . . 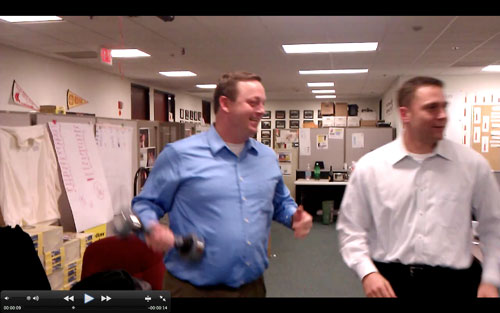 UPDATE: @rescommm74326 deleted it, so I updated this with the copy I saved.

Hmm, is it just me, or are those Yellowbook directories in the background? Is that a Yellowbook office? It’s the kind of thing that makes me wonder whether someone harassing me about my Yellowbook video works for . . . you guessed it . . . Yellowbook.

I realize that Yellowbook has a lot of employees, but how many companies foster a culture that makes employees think it’s okay to attack end users of your product on YouTube who have a legitimate complaint about a company’s customer service incompetence?

Keep in mind that this is the same company, Yellowbook, that never responded to me about my request to be paid for their continued spamming my my property after they promised to make it stop:

While many yellow pages companies are tone deaf when it comes to dealing with the public, I think Yellowbook leads the pack.

Back to YouTube user, rescommm74326. Here is another Idearc Media video that rescommm74326 decided to comment on recently:

Here are his comments:

Yes, he really wrote that.

@rescommm74326 has two followers on YouTube. One of them is the official YouTube account for . . . wait for it . . . Yellowbook. Yes, that’s correct. Yellowbook has associated themselves with what appears to be an employee who pees on competitor’s buildings, harasses end users of their product when they have legitimate complaints about Yellowbook failing to live up to their own promises, and makes racially horrific YouTube comments about a competitor’s spokesperson.

Yellowbook is going to have to try hard to outdo these examples of incompetence.

6 thoughts on “Yet Another Yellowbook USA Customer Service Fail”