Johnny Northside has uncovered an interesting line item in a Minneapolis Schools contract where Don Allen is scheduled to receive $15,000 for some form of video production work. This seems strange, considering the quality of work Don Allen publishes on his blog (it’s called the Independent Business News Network, but he hosts it at donny-allen.us).

I haven’t had a chance to meet Don Allen, but I have watched a lot of the videos he’s published and read a lot of his reporting. Based on the quality of the video production and writing I’ve seen him do to date, I don’t understand why the Minneapolis Schools would pay him for that type of service.

Additionally, I have a hard time trusting the guy. For example, last month he concocted a downright strange lie about North Minneapolis blogger, Eric Johnson, who runs a blog called Irving Inquisition. Don Allen, writing on his Independent Business News Network blog, claimed that Eric paid a prostitute to urinate on a house:

“We watch, we call” is being used inappropriately by some self-righteous White residents of north Minneapolis who find it funny to pay a Black woman $20 to watch her pull down her pants and urinate on a garage.

I kid you not. That’s what he wrote. In case Don Allen decides to delete it, here it is along with the picture Eric Johnson took of a prostitute urinate on a house (without coercion). 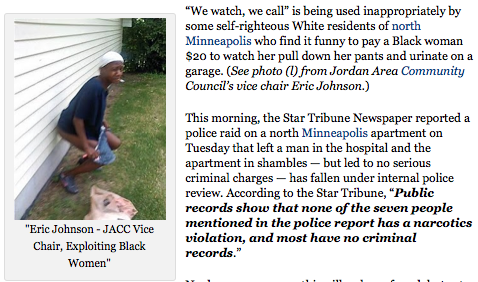 I coined this “Poopgate”, which is an even more ridiculous term for an already ridiculous accusation. Clearly, if Eric Johnson paid someone to urinate on a house, that would be one heck of an interesting story. I mean, who pays people to urinate on houses? Notice that Don Allen also claims that Eric Johnson, by taking that photo, is “exploiting black women”. Frankly, I don’t think the color of someone’s skin is the issue here. The issue is that people are urinating on the sides of houses in North Minneapolis, and Eric Johnson is tired of it. And that’s what Eric Johnson explained when he first wrote about the hooker that defecates on houses last summer.

So, back when Don Allen’s alleged “Poopgate” story broke, I asked him to back up his claim that Eric Johnson is paying prostitutes to defecate on houses. Having met Eric a couple times, and having been a regular reader of his blog since it launched, it seemed highly unlikely to me that Eric Johnson would pay a prostitute to defecate on houses in his neighborhood. I left the following comment. (At the time I let this comment, it was the 2nd comment on Don’s article, but he later deleted the first, which bumped mine up to position #1):

Don responded to my comment, but didn’t exactly answer what I thought was a fair question: 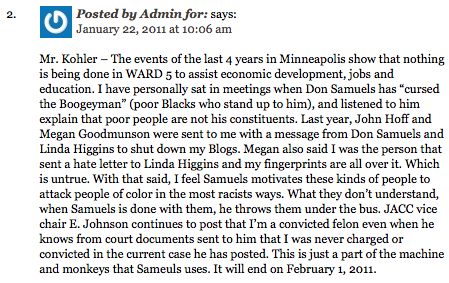 Don seems to be referring to these three posts on Eric Johnson’s blog (which links to some previous posts), where Eric Johnson published some info about Mr. Allen’s past. I found it hard to understand Don’s point, but I think he’s claiming that Eric Johnson made up stuff about him, so it’s okay for him to make up stuff about Eric. That didn’t really get to my question about whether he could prove his Poopgate accusations, so I followed up: 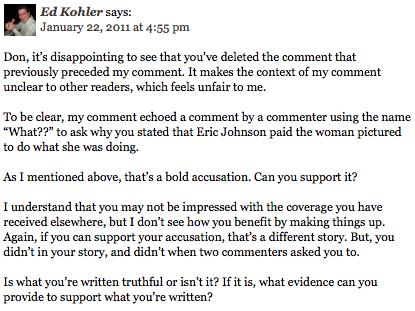 Don never got around to responding to that comment. In fact, he ended up deleting all of the comments from that post and removing the comments functionality from the post. Strangely, the three comments listed about still show up on Don Allen’s blog in his “Most Recent Comments” sidebar (and his site’s comments RSS feed): 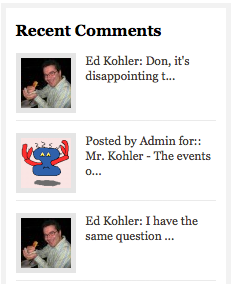 I’m having a hard time trusting Don Allen. As I see it, the man has proven to me that he’s willing to fabricate lies about people living in the City of Minneapolis, then delete comments that challenge him on his lies. That’s not the type of behavior I expect from people receiving funds from the Minneapolis Public Schools.

Don Allen is also scrubbing offensive videos from his YouTube account, as Johnny Northside has noticed. Again, this is not the type of behavior I’d expect from someone doing work for the Minneapolis Public Schools.

Frankly, I’d love to know more about how the Minneapolis Public Schools entered into a contract with Don Allen in the first place. With so many talented and trustful residents in the City of Minneapolis, what made the Minneapolis Schools decide that Don Allen was the right person to hire for video production work? How did they decide upon the contract’s value? How do they measure success? Where will Poopgate take us next? So many questions.