One of the saddest forms of behavior I see from blog and newspaper comments is the use of different usernames depending on whether the person is willing to stand behind their comments at the time.

On The Deets, all first-time commenter’s comments are held in moderation. This achieves three things:

First, it prevents spam comments from going live, with the exception of approved commenters who decide to get a bit too commercial down the road (rarely happens).

Second, it brings civility to the site by not providing a platform to the downright rude and offensive. They can head over to Minnesota Democrats Exposed or start their own blog if that’s how they want to behave.

And third, it throttles the comments of normally civil commenters who suddenly decide that they’re not willing to stand behind their own words.

Here is an example of this in action. A commenter who appears to reside in Fargo, ND who may be named Nick Thornton left a comment on this site that I considered to be civil back in August. I approved it. Recently, a person from the same address using a fake name commented here. That was held in moderation since he didn’t use the same name he did the first time. I approved it and responded to his comment. He left a second comment under his newly created handle, which went live right away. I responded to that as well. But then he decided to create yet another username for his next comment, which through him back into a moderation queue.

Below is a screenshot that shows the same IP address, a variety of made up usernames, and the made up email addresses he provided: 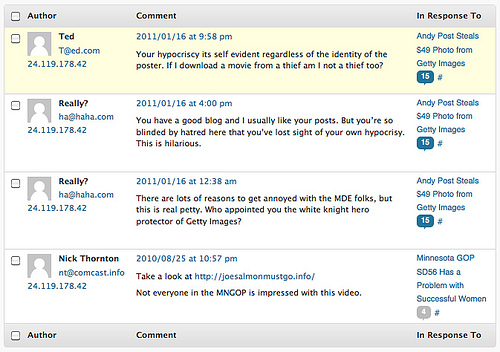 While this may be acceptible commenting behavior on some sites, I’m not a fan of it. And, this is my site, so I get to set the rules. Commenters who think this is unfair are welcome comment elsewhere or create their own blogs. By the way, if they choose to create their own blogs, consider sending trackbacks to posts you mention here. If you write at a consistent location where you’ve chosen to stand behind your own words, there is a good chance that you’ll write something worth citing within the comments here. I welcome the debate.

As I see it, you wouldn’t give a person the time of day at a party if they kept popping into conversations in different disguises, so why put up with that behavior at this online party? It seems unfair to people who are capable of acting like adults. Given a choice, I’d rather have respectable readers who are capable of leaving respectable comments. There are plenty of other homes for people who can’t live up to that standard when they’re behind a keyboard.

You’re creating more work for me and generally less value for my readers. That makes you the problem. Don’t let the door hit you on the way out.

By the way, the question asked in the unapproved comment was already addressed here.