It’s great to see a drop in homicides, but it would also be great to see the city illustrate the drop using year over year comparisons rather than comparing 1/2 of 2009 vs. the full year of previous years. 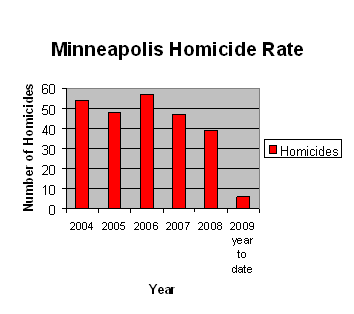 To spit-shine the numbers even further, the accompanying text states:

In 2007, within the first 110 days of the year, Minneapolis witnessed 18 homicides, compared with only three during that same period this year.

So in the explanation, they shift the date range once again to what seems like an arbitrarily shiny 110 days rather than the year to date illustration in the chart.

My advice: Don’t spit shine good news because you’ll run out of spit when you have less than good news to report down the road.

One thought on “Thoughts on Minneapolis Homicide Rate Reporting”