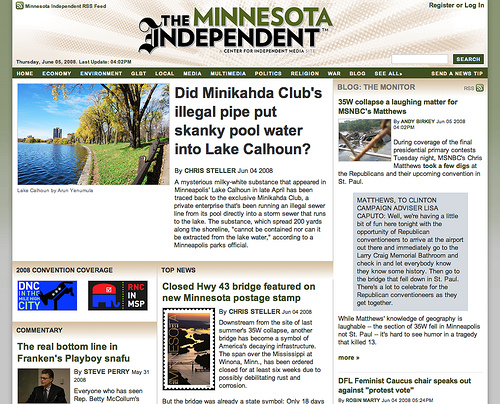 The Minnesota Monitor will soon have a new name, a new look, and a new location. The look is above. The new name is, “The Minnesota Independent” and the location will be www.MinnesotaIndependent.com based on the domain registered by the Center for Independent Media through GoDaddy.

Call it whatever you’d like today, one thing stands out to me: the site has some great journalists creating create excellent local political coverage but have been held back by technology. Registration and commenting has been more difficult than it should be. Site organization was confusing. And the design wasn’t as professional as the content it supported.

I’ve had a chance to play around with the site in staging at an undisclosed location (It may or may not be running off of Dick Cheney’s personal laptop.) Until the new site goes live, you can get a feel for how the site works by using one of The Minnesota Independent’s sister sites, The Washington Independent, The Colorado Independent, or The New Mexico Independent. There are additional sites in the Center for Independent Media’s network, but it doesn’t look like they’ve been updated to the new platform yet.

It looks like one benefit for CIM will be a single login for visitors to any of the CIM properties. This could be helpful as people flock to the Denver site for a local perspective, or whichever site happens to break some interesting news.

The comment registration system is very fast and simple to use. A vast improvement over the current sy

A real highlight for me is the site’s use of RSS feeds. They are some of the most generous feeds I’ve seen on a media site in a long time. Many articles are shown in their entirety while those that are cropped are still well shared.

One area where the site seems to have pulled back is in syndication of political blogs. Minnesota Monitor currently pulls in the latest headlines from local political blogs but that feature seems to be missing from the new Independent site.

Over the past 30 days, MinneosotaMonitor has been hitting around 2000-4000 visitors/day on weekdays. I imagine that will grow substantially on the new site due to easier commenting (thus bringing people back more often) and, of course, the continuous march toward the fall elections will certainly help.

It will be interesting to see how the site behaves once traffic and content picks up. My biggest concern with the layout is that it may behave like a newspaper. By that, I mean that it looks like an editor chooses what will be the main story for a certain time period. Not a bad concept. However, if the target market for this site is political news junkies (seems obvious) then why not just shovel it out chronologically? Put another way, provide a “river of news.” That allows the junkies to easily determine what’s changed since their last visit rather than wading past the old-news story of the day. MinnPost faces a similar challenge from this news junkie’s perspective.

I don’t think this has really been figured out by anyone yet. The Huffington Post has an interesting solution by leading with a big headline, then providing three columns with consistent content types: original content, syndicated news, and Entertainment.

One thing I’d move: Put the Most Popular widget above the fold. Probably to the top of the right column. That’s the best at-a-glance feature for the site. That is, assuming it provide “Most Popular” stats based on a current timeframe rather than all-time. If possible, run most recent posts and comments through that interface as well. That way there should always be something fresh and interesting for regulars to consume.

Moving a site can lead to some issues with search engines. Here is a link to Google’s advice on how to make a move with as little traffic interruption as possible from search engines.

One thought on “The Minnesota Independent: Sneak Peak”