The Freakonomics blog points to a study that found a correlation between the food options and obesity rates of residents:

The study found that neighborhoods with dramatically more fast-food restaurants and convenience stores than supermarkets also have significantly elevated rates of obesity and diabetes.

Here’s a nugget from the press release about the report where I’ve placed an emphasis on the last sentence:

THE LINK BETWEEN LOCAL FOOD ENVIRONMENTS AND OBESITY AND DIABETES

Beyond income, the report explains that this correlation holds true, “regardless of household income, race/ethnicity, age, gender, or physical activity levels of respondents.”

The report doesn’t answer this, but I’m interested in hearing your theories. Here’s mine: The distance you drive to buy groceries effects how you shop. 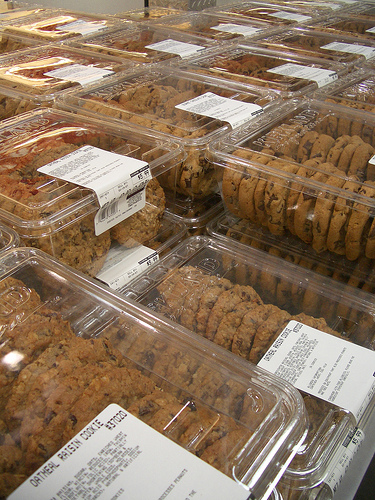 How this breaks down for me: I often walk over to SuperAmerica to buy a cookie. It’s only a couple blocks from my house, so I tend to only buy 1-2 cookies when I go there. When I drive to a local grocery store like Cub I tend to buy a package of cookies rather than 1-2 individual cookies. And guess what? I’ll probably end up eating more than 1-2 cookies after I get home from the grocery store. Now scale this to driving to a Costco where I’d probably buy a box of packages of cookies because they’re such a good deal.

The further I drive for cookies, the more I’ll buy when I’m there. I’ll spend more sedentary time riding in a car and end up consuming more calories by bulk-eating my bulk purchases.

I see some correlations here with what I’d consider European styles of food shopping and eating. If you shop more often, you’ll buy fresher food in more sane quantities and have less urge to snack yourself into obesity on “family packs” of processed corn.

Here are a few more correlations one could test for:

6 thoughts on “Obesity and Neighborhood Choices”