I found this interesting nugget on the Croatian War of Independence at Wikipedia:

The USA was among the more conservative forces in the west, like the United Kingdom (with John Major as Prime Minister) in insisting for non-intervention at first. The administration was led by George Bush as President until end-1992. Matters changed with Bill Clinton, who took a more aggressive stance on the issue and played a more forceful intervention role. In 1995 the US, using the latest Predator and other tracking devices, thoroughly observed the movements or the Croat Army and Gotovina’s forces in preparation for Operation Storm.

On the Slovenia scene, we read in Rick Steves’ Croatia & Slovenia 2007 that told of a HUGE turn-out for Bill Clinton when he visited Ljubljana, Slovenia, yet hardly anyone showed up for King George II’s visit.

Somewhat related, check out the following cartoon from Cartoonstock on the differences between Yugoslavia and Iraq in their post-dictatorship histories: 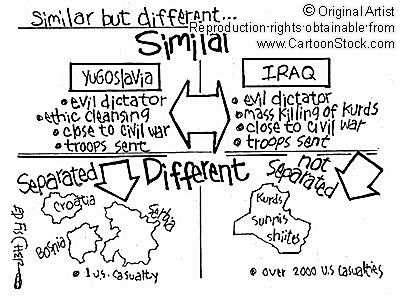 Is a united Iraq the right approach? Can it exist without a ruthless dictator like Saddam Hussein holding together the various factions making up that part of the world?