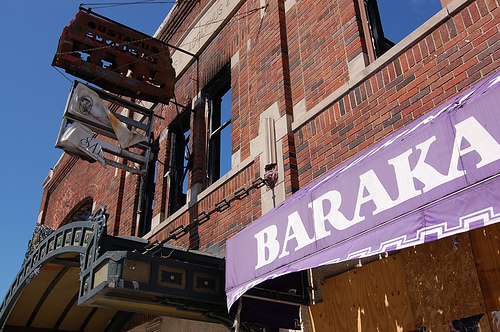 A great photo of Gustavus Hall by kaslingsby, which was last home to Baraka Rugs a few years back when it burned back on . . . get this . . . January 14, 2004. It’s sat empty, collecting graffiti, with an insecure door for more than three years now.

Who knows what goes on inside this place? Why has it been more than three years with no improvement to this property?

I believe the city has authorized the demolition of the building after many many many attempts to get the building’s owner to do something with it.

Here is some history of the woman who owned Baraka Rugs.

The building used to also house a music venue named The Babylon. Here’s a forum thread from the day the building burned down from The Babylon’s angle.

There is a Shoefiti angle to this story. Here’s a post from 18 months ago regarding the shoefiti near the building.