I remember the term “douchebag” gaining some popularity when I was in high school, but didn’t remember hearing in college. A decade passed, and now I’m starting to hear it again. A somewhat related term, “Assclown” gained traction for a while, but that seems to have died off.

According to Google Trends, Douchebag is indeed growing in popularity these days after holding steady for years.

I haven’t been able to pin down what’s caused the sudden spike in douchebaggery.

One word or Two?

I come from the conjugation camp, but there are plenty of people who like to provide some air between their douche and their bag.

According to Google Trends, the conjugated crowd tends to be East Coast, but extends at least as far West and Chicago and Minneapolis. It’s a faster paces lifestyle than the left coast where they take the time to space their words:

How is the term used today?

I surveyed some local blogs to get a feel for how “douchebag” is being used to day. Here’s what I found.

Amber recently mentioned that she was going to go to a Halloween party as a “Douche + bag = Douchebag.”

Bauschy has video evidence that it happened. Be warned. You’ll have to watch some sexy bunny dancing before you get to the douchebag:

Rex calls Garrison Keillor a douchebag, while Diablo Cody uses it in a moment of introspection.

Holy Crap Does That Piss Me Off, unsurprisingly, found a douchebag in his/her life. it turns out it’s the person who has to print off every email they receive.

Can you pin down why this term is suddenly making a comeback? Does Kevin Federline have something to do with this?

Jargon watch! Gaysted (adj.): “when heterosexual people get so wasted, they slip into seemingly gay acts”.

Personally, I’ve been around enough wasted gay people and wasted heterosexual folks to know that a wasted gaysted homosexuals are way gayer than wasted gay folks.

blogorrhea: To write a blog entry just for the sake of posting an entry, not because you have done anything interesting today. (Does this qualify?)

bi-sacksual: Able to use either paper or plastic bags. (I tend to lean paper, but I can go both ways depending on the situation.) 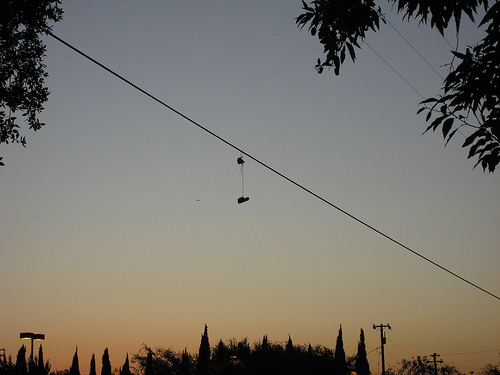 Jeremy snapped this shot in Sunnyvale, CA just after sunset. Don’t worry, we weren’t hanging out waiting for perfect light.

Shoefiti.com is undergoing some serious upgrades. I’m shooting for having it back online by the end of the year.

BTW, it looks like the term I coined is catching on. People are describing shoes on power lines loaded to Flickr as Shoefiti these days.