After reading about a purple sombrero wearing Vikings fan who can’t control his fists, I took a look at the Green Bay Press-Gazette’s homepage: 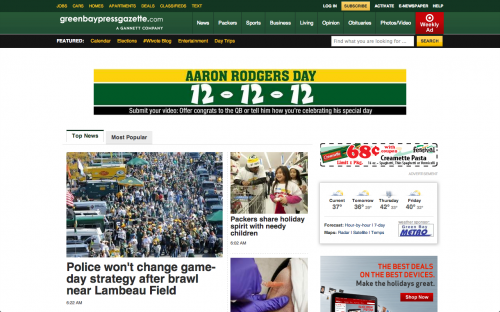 That’s not a special Packers section of the paper. That’s the homepage.

The Top Stories on the site include:

Then they offer headlines from sections of the site starting with Packers, followed by Sports: 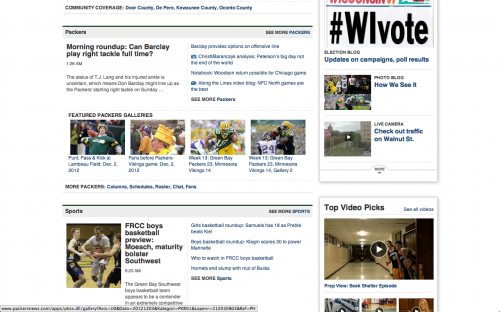 Strangely, the section after Sports is Lifestyle which sounds redundant with the Packers section to me.

Since Lambeau is an outdoor stadium, the Outdoors section of the paper also seems redundant. That is, until I saw the story about ice fishing: 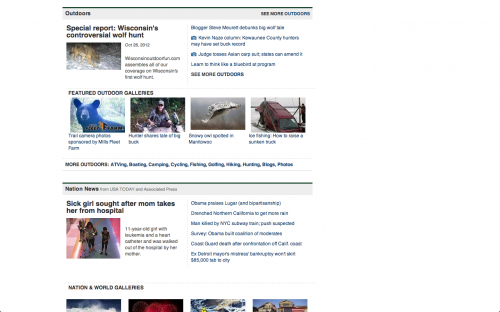 Rather than running public service piece on how to avoid sinking your truck while ice fishing, the Green Bay Press-Gazette decided that their readers would benefit more from “Ice fishing: How to raise a sunken truck”. Katie Cannon traveled to Wisconsin to capture this intriguing TP shot at Heidel House. This place is serious about relaxation, and puts guests’ minds at ease with their TP presentations. Wisconsin seems to lead the nation in matching couples fashion trend. Traditionally, this applies to choices in snowmobile branded winter wear such as Arctic Cat or Polaris. Couples dress in his and hers outfits.

But now I’m seeing it apply to business clothes as well, such as the matching Re/Max real estate agents from Phillips, Wisconsin pictured above.

While I haven’t seen it, I wouldn’t be surprised to find out that it also applies to undergarments purchased with Marlboro Miles.

TwinCitiesBeerPrices.com is reporting via the Chicago Tribune (FIBs) that Wisconsin bar owners are disrespecting beer by failing to clean the lines to their taps on a regular basis:

Industry standards call for the lines to be cleaned at least once every two weeks. While they wonâ€™t make you sick, dirty beer lines can spoil beer.

My extensive Wisconsin beer drinking experience leans toward macro brews, so perhaps this is simply a technique used to introduce flavor into MGD and LITE? Paul Jahn went down to Chicago for an inline marathon this weekend.

It’s not clear whether Paul consumed a bag of cheese curds from every one of these stops before his race. Can anyone guess where this photo was taken?

And no, this wasn’t our final destination.

A friend of mine from college thinks that George W. Bush’s Texas accent is real, that we’re winning in Iraq (yet he can’t define HOW we’re winning or what winning looks like), and that Democrats drink the blood of babies (more or less).

He also happens to be a member of the 101st Fighting Keyboarders defending Christmas from Democratic evildoers. While crushing his latest can of Busch Light (ironic when said rather than read) with his left hand, he forwards right-wing jokes with his right. Here’s the latest:

For My Democrat Friends:

Please accept with no obligation, implied or implicit, my best wishes for an environmentally conscious, socially responsible, low-stress, non-addictive, gender-neutral celebration of the winter solstice holiday, practiced within the most enjoyable traditions of the religious persuasion of your choice, or secular practices of your choice, with respect for the religious/secular persuasion and/or traditions of others, or their choice not to practice religious or secular traditions at all. I also wish you a fiscally successful, personally fulfilling and medically uncomplicated recognition of the onset of the generally accepted calendar year 2007, but not without due respect for the calendars of choice of other cultures whose contributions to society have helped make America great. Not to imply that America is necessarily greater than any other country nor the only America in the Western Hemisphere.

For My Republican Friends:

My friend celebrates the birth of a non-white, non-American, non-Republican person born to an asexual couple by making fun of people (Democrats) who, ironically, respect others without regard to “race, creed, color, age, physical ability, religious faith or sexual preference.”

Here’s a previous exchange from over three years ago when he was convinced the media was misleading the American public by supposedly failing to report on how well things were going in Iraq. 465 Americans had already died in Iraq. 2,485 more Americans have died since.

I suppose it’s easier to fight (via keyboard) a fake war trumped up by a couple FOX News talking heads than to defend the bloodshed caused by President Bush.

What I don’t understand is why so many people NEED an enemy in their life. Is hate therapeutic? Does a polarized world-view give people a sense of place?

Here is my first shot at a theory on this: people who look down on others due to their political affiliation or religious beliefs would like to live in a simpler world. By dismissing the beliefs of the vast majority of Americans (the majority of Americans belong a different political party or no party at all), and the vast majority of the world (people of different religions, races, etc.), the world becomes a much smaller and more manageable space. It’s a comfortable world-view that comes without the burden of learning about other places, people, and religions beyond basic stereotypes so you can make fun of them.

Mike over at Jackalope Ranch came up with the idea for Brie String Cheese back in ’03. At the time, one of his concerns was that someone would steal his brilliant idea once he released it into the public domain. With more than three years having passed and no sign of string brie on the shelves at my local Rainbow, Cub, Lunds, or Bylerly’s, I think Mike’s idea was either too early, or the world’s best food scientists with an emphasis in dairy have had as many problems bringing this to market as Bush has had figuring out what to do about the war he started in Iraq.

Personally, I find the concept of a string brie somewhat beyond the reach of even 2006 dairy technology based on the simple fact that brie is not a stringy cheese. I think a more practical answer to the challenges faced by Mike (primarily inconvenience of dealing with the typical wedge with rind) would be a snack pack. Ideally, the snack pack would allow for rindless packaging and pairing with appropriate crackers. Brie eaters being the cheese snobs they are would certainly lead to painful focus grouping by the good folks at Sargento in Little Chute, Wisconsin and other fine cheese towns.

Assuming I’m on the right track with a snack pack for brie, why not pair it with an appropriate wine? A perfect impulse buy for Carly and I would be a brie and Pinot Noir Snackables placed right next to the French baguettes in Whole Foods.

A product like this is the perfect way to unite this country. Taking a French product and making it our own in a way that would completely disgust the originators across the pond. If brie Snackables existed, I bet Lee Greenwood and Toby Keith would put them on their concert riders.

Be sure to check back in 2009 to see if any progress has been made on this important issue. Until then, what will come first: