Food. Caffeine. Internet. The three tiers of sustainability and productivity. Today’s focus is on the third: internet.

If you’re a Longfellow business looking for a new customer who’s willing to put in some time at non-peak hours, here’s what I’m looking for. By the way, I’m not alone by any means. I often walk to Longfellow venues to meet up with other geeky neighbors with money to combine work with a little socializing.

I look for easy to access, fast, reliable internet. Making me fill out passwords and other authentication hoops hurts me without doing much to help you.

I look for reliability. Can I count on it actually working? If I’m at your venue and the WiFi drops, I can use my phone to create an internet connection, but that’s a switch from using a pipe you’ve already paid for to using ridiculously expensive bandwidth (and cell phone battery).

Keep in mind that this is just looking at WiFi ease of access and reliability. If you measure these same 10 venues based on not using your computer or looking at your phone, the list changes dramatically.

If I’m missing places worthy of top-10 rankings, or you disagree with my analysis, please chime in. We’re on the same side of this issue.

The City of Minneapolis is in the process of rolling out a city-wide WiFi service for residents. It’s not a free service. Rather, there are daily and monthly subscriptions available to anyone who anyone with a WiFi connection in the city.

A Community Benefits Agreement is tied into the project, which outlines a series of concessions the vendor – in this case, local ISP, US Internet – as expected to make in exchange for being rewarded the contract.

One concession that’s particularly interesting is a “civic garden” of websites that are deemed publicly accessible with or without a wireless subscription. The sites reside on the public Internet, but are given a free pass by USI.

A group has been working to decide what types of sites deserve this special status, and building a site that will act as a portal to the sites given this free pass. Generally, sites tied to local government services and non-profit social service type sites will make the cut. Here’s a mock-up of a page from the proposed civic garden portal: The portal looks impressive, and seems to do a better job of organizing the various services available to Minneapolis residents than the city’s own website does. Very cool.

But what I don’t understand is who really benefits from the free civic garden. Think about this: how many people in the city of Minneapolis have a computer, with WiFi, but no Internet access today? How many of those people would use their computer to access a handful of government and non-profit websites, given the chance? That seems like an impossibly small number of residents.

As I see it, the biggest market for this type of content (free with WiFi access) isn’t city residents but city visitors. Thousands and thousands of people visit Minneapolis every day for business with laptops in tow. What types of content could make their time in our city more enjoyable?

Chicago is now starting a similar discussion. Peter Fleck has a lot more info on the Minneapolis Wireless scene on his blog.

BusinessWeek is reporting that municipal WiFi initiatives aimed at providing free or nearly free Internet access are not meeting expectations:

Why Wi-Fi Networks Are Floundering

These potholes in the nation’s wireless rollout of civic ambition—criticized by many as an improper use of tax dollars—are hardly the exception. For the road is getting bumpier for cities and the companies they have partnered with in a bid to blanket their streets with high-speed Internet access at little or no cost to users.

Minneapolis is currently in the middle of a roll-out of citywide WiFi based on a pay model. As I understand it, the city contracted with a local ISP to build the network, and will buy all of the city’s bandwidth from that supplier. Beyond that, the network is available to the public for daily or monthly fees.

While they may make a few bucks off one-off daily usage by travelers, it doesn’t seem competitive price-wise with cable or DSL to me. I can’t imagine people will drop their faster wired connections for a wireless one.

If that’s the case, the market opportunity is limited to people currently using dial-up or no Internet connection. Those are two very tough groups to market to.

In Minneapolis’ case, I believe the network is supported through the city’s own spending. That’s a different model from the direct-to-consumer models BusinessWeek suggests are floundering.

I noticed the antennas were being installed on Tuesday morning on 46th Ave S while I was on the way to work. Now I see a signal on the home front: 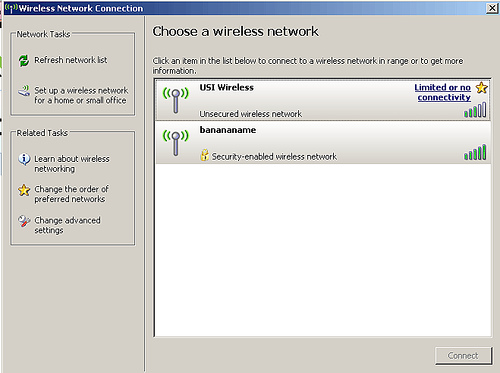 My commute was particularly horrendous on a morning earlier this week, so I broke up the trip with a stop into a Caribou Coffee coffee shop in Edina, MN where I figured I could wait things out while checking a few emails and enjoying a cappuccino.

Caribou was a little late to the caffeinated WiFi scene, but has since jumped in with a free WiFi offering. However, there’s a twist. It’s only free for one hour and one minute:

After selecting the network and logging in, the following screen pops up. That seems reasonable to me. If you’re not buying anything, get out. It is a business after all.

I haven’t encountered this particularly policy on previous visits, so wonder if this was put in place after encountering too many WiFi squatters?

The Star Tribune has published US Internet’s rollout schedule for city-wide WiFi. It’s already in place along Franklin in Seward. Here are a few dates I thought were interesting:

June 5: All of downtown

Maybe Nathan’s close enough to Longfellow to grab a signal before November?

Are you considering switching over to this? From what I’ve heard about the service, I’m not at this point. It costs about 1/2 of what I spend with Comcast for cable ISP, but also has lower speeds. The flexibility of accessing the network from anywhere in the city isn’t a particularly big sell for me since there are so many places with free access outside of my home already.

Quick quote from your media whore about a new free WiFi network out of Spain that’s invading the United States:

If case you’re not a regular reader of Advertising Age. It’s a magazine about . . . wait for it . . . advertising. They put articles between the ads to mix things up a bit.

Advertising Age has an article in this week’s issue on the potential impact of FON’s free WiFi sharing system on Starbucks.

It includes the following take from me:

How do you see this playing out? Do you think there are coffee shops NOT offering free WiFi today who suddenly will because of FON? If Minneapolis is anything like other cities around the country, I can’t believe this is the case.

Jeremy Toeman from LIVEdigitally is living the jury duty lifestyle, and has filed the following report on the WiFi status in the jury waiting room:

– The good part is, the summons waiting room has WiFi.

– The bad parts are, it’s not free, it’s slow, and it drops connections every 10-ish minutes.

I wonder if Jeremy will come out ahead on his jury duty stipend after WiFi costs?

Peter Fleck has a great update on the Minneapolis WiFi scene. It turns out it’s available now in Seward. He even has a link to a map of the WiFi antennas.

A comfortable place for wireless exploration would be the 2nd Moon Coffee Shop at 2225 East Franklin Avenue. You should be able to see the USI Wireless network there and you can browse the Web via the free wireless at 2nd Moon if you don’t want to pay USI for some browsing time.