As if there isn’t enough tea talk around here already. Check out this news on sponsors who pulled out of Imus’ show and who didn’t:

What now with all this tea!?

Anyone who thinks Imus was fired for his comment is wrong. He was fired because his advertisers bailed on his show. CBS have cashed in on Imus’ for years. That’s how they roll. 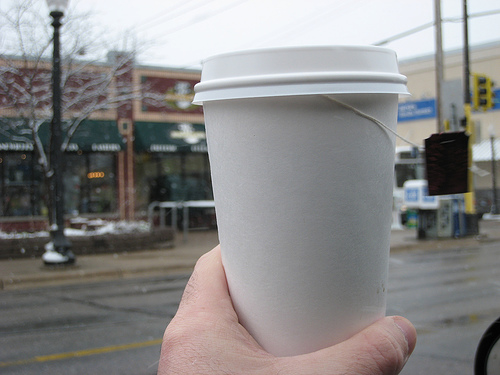 I stopped in at the Riverview Cafe today without my children to pick up some tea. The thing is, I don’t have kids, so I feel a bit out of place every time I go to the Riverview Cafe since the place is always hopping with kids and could really use a stroller parking lot out front. It’s crazy, but in a good way. Just not my scene at this time in my life.

They have a wide selection of Tazo teas, and being early in the day, I leaned toward the caffeinated ones, and what would possibly have more caffeine than a tea called Awake?

The tea seems to focus more on caffeine than flavor, but that’s what I was looking for, so all was well. Riverview is a put-your-own-lids-on kinda place, so I was in a position to place the tea-bad perfectly in the to-go cup. In my opinion, the key is to trap the string with the lid so the bad hovers between 1/2 and 1/3 of the way into the cup. Any deeper and it will over-steep the bottom of the cup. I don’t even want to talk about drinking a cup of tea where the bag is all the way at the bottom of the cup the entire time. Nasty.

This shot was taken with my car window rolled down, while snow was falling and the wind was blowing the tea bag’s tag around. 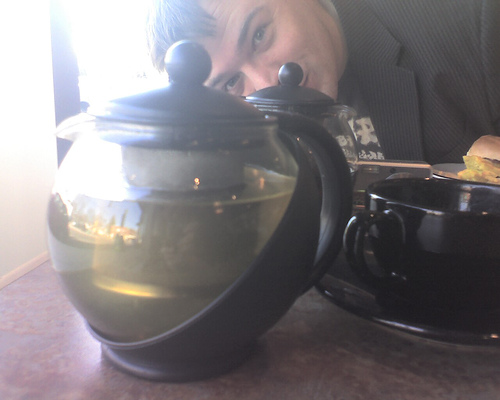 Today’s tea of the day is a toasted rice green tea from Tillie’s Bean in Minneapolis.

It’s a little bitter,and becoming more bitter as I drink it. probably because I can’t stop the steeping in this type of tea pot.

The toasted rice dealio does seem to provide some extra body, but without a way to stop the steeping, it goes downhill fast. Actually, steeping for 1-2 minutes, then pouring into a togo cup would do the trick.

And yes, that is Ben of BenCredible.com poking his head into the picture. He had an Earl Grey. 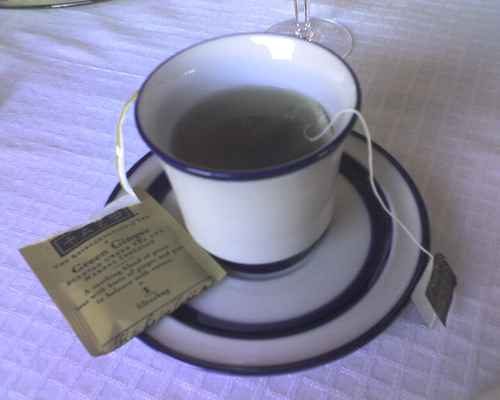 Today’s tea of the day is Tazo’s Green Ginger.

Ginger is the highlight here, with a light scent and mild flavor.

They say there are natural flavors in this thing, but I have no idea what that means.

It’s not at bitter as some green teas I’ve tried, but that could be due to less hot water. Whatever it is, it worked for me. 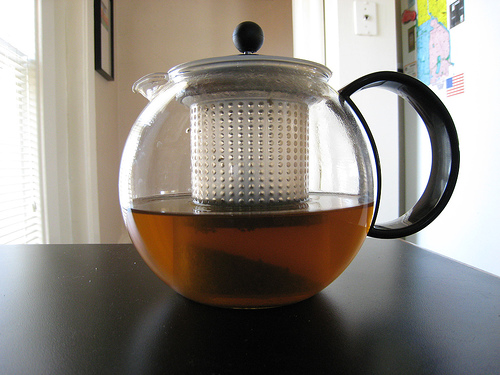 Today’s tea is Yerba Mate. It’s a green loose leaf tea that looks like weed. It has a musty green tea flavor, and is slightly bitter, but very drinkable, which is good because I have a pound of it. The instructions say to soak the leaves in cold water before adding hot water, and that the hot water shouldn’t be boiling. That’s a lot of work for tea, in my opinion.

I followed the steps today and couldn’t taste the difference vs. dumping hot water on it without a pre-soak. Using water that’s less than boiling is definitely key to making a good green tea though. Bitterness can go through the roof if you hit them with 200+ F water.

It’s high in anti-oxidents and has half the caffeine of coffee, so it’s a good wake-me-up you can feel good about drinking without getting such a buzz that all you can do is watch 10 second clips on YouTube.

This is available in a green package at the Seward Coop. 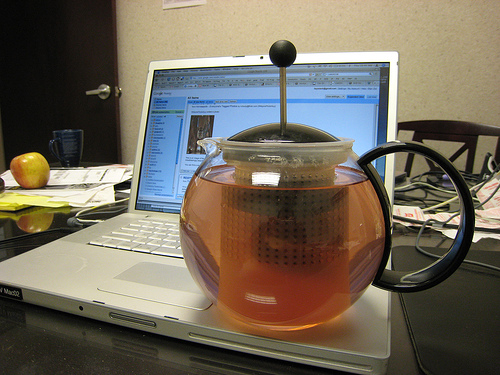 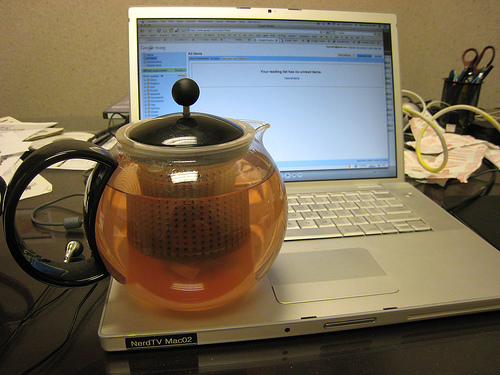 Since there’s snow on the ground again, I figured it would be a good time to launch a new feature on The Deets: Tea of the Day, or TotD for short.

The first tea to step to the plate is Celestial Seasonings Orange Tangerine Zinger.

Why this particular tea?

It was collecting dust in a cabinet at work and somebody had to drink it.

The tea does indeed have an orange scent to it, but is rather flavorless. Like most Celestial Seasonings teas, it’s pretty forgettable, but that won’t stop me from using the remaining 3 tea bags in the cabinet over time.

The much hyped, over-promised, and under-delivered blog on the planet is back from the dead. Ben of BenCredible.com has posted his fifth post after a three month hiatus.

“I normally drink an Earl Grey Creme, but today I decided to branch out and start with the kabillion bags of tea that we got as a tea-of-the-month club at Teavana.”

Not to be confused with tea bagging.

TotD apparently stands for “Tea of the Day.” Ben couldn’t be reached for comment at press time to confirm this. Assuming for now that that’s the case, can we expect another TotD post, say, tomorrow?

Only time will tell.