As I understand it, Vancouver, BC has banned the display of cigarettes in convenience stores, which has led to some interesting adjustments. It’s common to see an entire wall of nicotine behind the register of a convenience store – heck, the SuperAmerica by my house is basically a tobacco shop / casino – so what would products should they put there now?

And incredibly thorough selection of condoms?

Perhaps you heard this past week about a study done by the U of MN that measured the pee of hospitality workers pre and post-smoking ban? Here is a summary of the results from the ClearWay site. ClearWay, by the way, is a group set up to spend tobacco settlement money on anti-smoking efforts.

Conducted by the University of Minnesota Cancer Center and sponsored by ClearWay MinnesotaSM, the study analyzed urine samples taken from nonsmoking hospitality workers before and after the smoke-free workplace law took effect. Findings show that levels of NNAL, a byproduct of a lung cancer-causing toxin, decreased by 85 percent, and levels of cotinine, a measure of nicotine exposure, decreased by 83 percent.

It is kind of scary to think about non-smoking servers inhaling smoke, which then passes through their lungs, blood stream, kidneys and bladder before leaving their system. Night after night.

ClearWay is trying to get the word out about the findings, so is kicking off an ad campaign to further illustrate the point:

You can review the report here in PDF.

This is the first report I’ve seen from a newly smoke-free area of the state. Apparently, life has indeed gone on without smoking in bars and restaurants:

â€œThe first few weeks, there was an initial buzz where thatâ€™s all everyone was talking about,â€ Shol said. â€œBut then things got back to normal. We havenâ€™t lost any regulars. We gained a few we havenâ€™t seen in a while â€” they couldnâ€™t come in here because of the smoke because they had health restrictions.â€

â€œIt smells good and I can breath better,â€ said one Viking regular, who wished to remain anonymous. â€œItâ€™s not so smoky.â€ However, she said, she wouldnâ€™t have stopped patronizing the Viking even if it hadnâ€™t gone smoke-free.

Roadguy is the best blog on the Star Tribune. If I’m wrong out that, let me know which is better.

Here’s a great comment Roadguy received from a reader about a chain smoking SUV driver on 35W in the Northern ‘burbs. I have a feeling that I don’t have much in common with this woman:

Last night, I saw a woman driving an SUV on northbound 35W lighting a cigarette around County Road E. She took a total of 2Â½ minutes to enjoy the cigarette, then threw it out the window of her truck. As appalled as I was, I had no idea that sheâ€™d actually light up another cigarette just 2 minutes later, and do exactly the same thing! â€¦ After finishing the second cigarette, she actually lit a third, and after sucking the last bit of brown crap from it, threw it out the window too!! She polished off and threw out onto the highway three cigarettes all within roughly 10 minutes! â€¦

Or, just another day in the life of a chimney?

I couldn’t agree more with Rick Nelson’s analysis of this smoking restaurant. I removed the name of the restaurant since the same statement could be made about every restaurant that allows smoking today:

Now open: A giant, all-American menu – with a helping of smoke

What hit me as I first walked into [__________________] was not the bustling opening-night crowd. It wasn’t the spacious setting, either. It was the cigarette smoke. I guess I’ve been dining in smoke-free Hennepin and Ramsey counties a bit too much, because after spending a half-hour in the place — located two blocks over the Anoka County line from smoke-free Minneapolis — my throat was dry, my eyes were watering and my clothes reeked. And we were seated in the nonsmoking section.

My dining, and thus dollars, goes to smoke free environments.

The Times-Republican is reporting that the U of Iowa may be the first Big-10 school to go smoke free:

Taking a cigarette break at the University of Iowa could mean hopping in a car and driving off the 1,900-acre campus under a plan headed for the schoolâ€™s president.

A couple non-smoking alumns looked like this upon hearing the news: 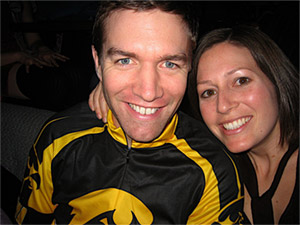 This gives the Hawkeyes a talon up over the Cyclones in my book.