The party’s over in Forest Lake. No more camping out for great views at the 4th of July Parade.

The Forest Lake City Council passed an ordinance Monday that prohibits the public from reserving parade route spots on public property no earlier than sunrise on the day of the parade. The action stems from the 2007 celebration that saw area residents staking out parade route viewing points four and five days before July 4th.

I’ve never been to the Forest Lake 4th of July Parade, but if they’re passing laws to prevent people from setting up camp to watch the thing 4-5 days in advance, I can only assume it has elephants jumping through flaming hoops, Cirque du Soleil acrobats emerging through pavement, and Dora. 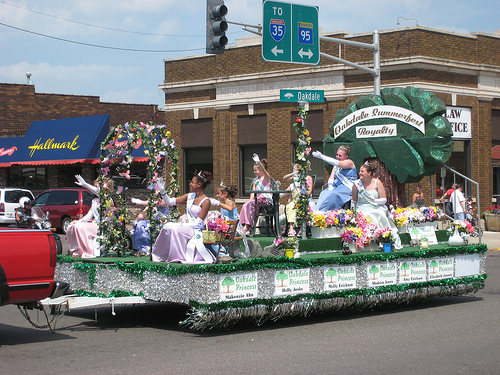 I’m biking through North Branch right now on my way to Hinkley for a Sunday ride. There is an awesome tailwind carrying me along at a relaxing 20MPH.

I ran into conjestion in downtown North Branch where a parade was passing through town. After some typically scary clowns passed by I snapped this picture of the Oakdale princesses before continuing North.

Unlike Lumberjack Days in Stillwater, I saw no water fights between princesses and attendees.