Jeremy and I drove to Chicago today, and on our way into Madison, we noticed a semi was parked in a farm field with what looked like electrical tape lettering on the side of it advertising an adult toy, mags, bakery & lingerie store. I don’t know about you, but it isn’t every day that I stumble across a bakery along the interstate, and the thought of a bear claw or cream filled chocolate long john really gave me a hankerin’.

So, we pulled off at what I remember as exit 172, but don’t hold me to that. The sign on the semi didn’t mention where the store was, but Jeremy figured it would be right at the exit, and he was right.

While the sign wasn’t promising, I had high hopes that I’d be able to buy a donut from a Victoria’s Secret model who was working on her master’s degree at the U of Wisconsin, Madison. 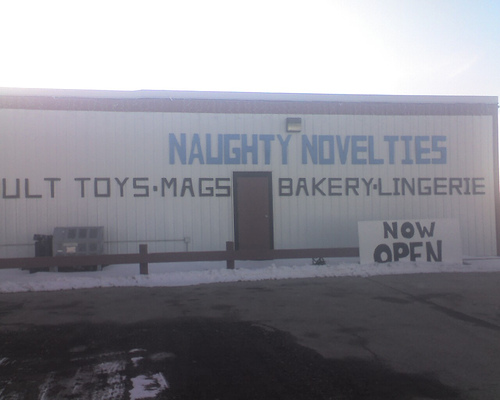 They clearly put more time into the sign on the store than the one on the semi. You’re going to have to trust me on that since I don’t have a picture of the semi ad.

After fully casing out the store, I went to the front desk in search of their elusive donuts. Perhaps they keep them behind the counter?

The semi toothless guy behind the counter informed me that they don’t have a bakery in the Mel-O-Glaze sense, but, “we do titty cakes to order.” I think that means they do stuff like this.

I didn’t have time to wait for a titty cake, so I hopped back in the car, broke the news to Jeremy, and burned rubber.

Kirk has a great shot of a spam mobile over on his blog, and he mentions wiener mobiles, so I thought I’d whip out this shot from Madison, WI, where I had a chance to see the Oscar Meyer Wienermobile up close and in person. 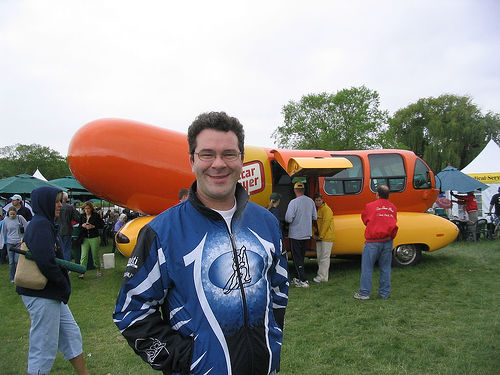 Are there other meat mobiles crossing the country?

I can’t think of anything cooler than being picked up hitchhiking by a bacon wrapped little wiener mobile.