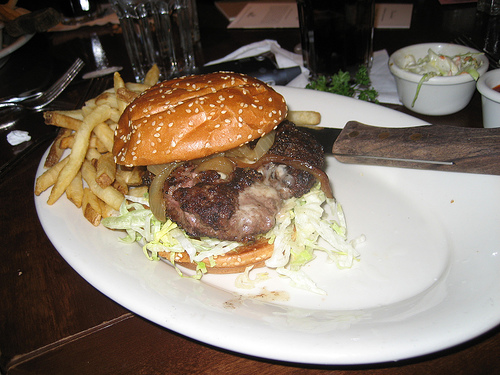 I was surprised to find a Jucy Lucy on the specials menu at Wildfire today. Obviously, I had to try it.

It was hiding under the name “Stuffed Peppercorn White Cheddar Burger.”

My first realization that things weren’t going to go we’ll was when they asked how it should be cooked. Um, Jucy’s are either done or now done.

It had cooked onions, sesame seed bun, lettuce, and tomatoes.

The Lucy showed up ruptured, so they didn’t manage to deliver the goods. It was also slightly burnt.

Would I get it again? Nope. But I do have to give Wildfire credit for trying.

Before continuing my Jucy Lucy expose, I’d like to clear one thing up: The Jucy Lucy is spelled J-U-C-Y L-U-C-Y.

See an “I” there? I didn’t think so. However, there has been precedent set for including an “I” by Dara Moskowitz, who managed to misspell Jucy Lucy throughout a 1998 article on said burger in a 1998 CityPages article. For those of you who are entirely lost at this point, notice the cheese oozing from the MIDDLE of the above burger. THAT’S a Jucy Lucy. Cheese in the middle of the burger. Get it now? If not, move on.
Additionally, it’s worth noting that Wikipedia had a debate about whether the Jucy Lucy should be sub-categorized under Cheeseburger, but to date this has not happened. It’s kind of like the marsupial of cheeseburgers, where cheeseburgers formed their own species after the break-up of Pangaea.