The Deets’ Senior Rust-Belt Reporter, James, snapped this show of a Curves workout location directly above a Coldstone Creamery. Talk about your perfect combination of locations for the yo-yo dieter.

This was taken in Squirrel Hill, Pittsburgh, PA.

This YouTube star decided to hold herself accountable to her weight loss goals by publishing her weigh-ins on YouTube. And it worked!

A spammer commenting on an 18 month old post that has nothing to do with dieting asks:

Have you ever dreamed of stripping away the layers of body fat surrounding your midsection or thighs, but never really knew where to begin?

Actually, no, I’ve never experienced this problem you describe, Mr. Spammer. In fact, I don’t think anyone does.

The Pioneer Press has a great profile of a guy who turned his health around by going from a gout stricken 270+ pound fast food eating, soda pounding sedentary dude to a marathon trainer:

“I also ate a lot of fast food. It’s mainly because of my job (as a building maintenance worker). I didn’t have time to grab something decently prepared. I would just get a Big Mac or a Whopper. And I always got the fries – usually the supersize fries.

“The gout, turning 40 and family history (male longevity in my family isn’t very long) just made me think about losing weight. I let my body go too far. I want to be there for my kids, Ronald, 7, and Tessa, 4.

What gets me is his comment that he “didn’t have time to grab something decently prepared.” That obviously wasn’t really the case since he since found time to train for a marathon. However, I think that statement is a common statement made by people who aren’t taking good enough care of their bodies.

Have you heard of fat blogging? It’s a way to hold yourself accountable for your dieting goals by blogging your current weight and progress. As I understand it, dot.com entrepreneur Jason Calacanis came up with the concept, and has personally lost 22 pounds since he started:

Haven’t been fatblogging, but have been losing weight. This past week I weighed in between 183 and 186. Today, 185. I’m down from 207 a year ago and losing 20 pounds, I can honestly say, is one of the best things I’ve done in years.

That’s a great post where he outlines what he’s learned about his own struggles with weight.

It’s strange. People feel comfortable sharing some goals with their audience, such as plans to buy a new house, vacations, etc. while other things are generally off limits: financial and weight goals. What’s strange about this is it’s really the latter goals that will have the largest impact on one’s quality of life. Yet they don’t deserve the same level of visibility and accountability given more materialistic goals? ‘sup with that?

Which reminds me: August’s 30-day challenge is no beer. My last beer was before midnight on the 31st of July in San Francisco, so technically August 1st CST, which is something I’ll keep in mind on September 1st.

I’ve pretty much given up high fructose corn syrup since doing that for a 30-day challenge earlier this year. There is the occasional exception for Powerade, which I prefer over Gatorade since they don’t put the stupid seal Gatorade putsover the top of the bottle that I can never get off. Since I only drink the stuff on long rides, I think I’m justified.

The Star Tribune ran some tips on how to make healthier choices when dining out, but this one is simply unacceptable from my perspective:

Plan ahead to eat out healthfully

Beware of the bread basket. Most restaurants serve a delicious selection of breads (or in a Mexican restaurant, a basket of chips) and butter. Instead of loading up before your entree arrives, enjoy just one piece of bread (or about a dozen chips with salsa) and forgo the butter. Better yet, skip the bread and order a cup of broth-based soup. Foods with high water content, like soup, fill you up so you won’t be tempted to overeat.

They admit that the breads are delicious, then tell us to have only one piece without butter or a cup of broth based soup – presumably without bread? That’s like telling people how good Ben & Jerry’s is, then steering them toward a sugar-free popsicle.

For those who are into their bread baskets, the best I’ve found in town is at Al Vento. Soft, savory bread with some olive oil and cracked pepper is soooo good.

Great post on Mindless Eating about how people tend to over-indulge when eating foods labeled “low-fat.” Sure, they have less fat, but do they have less calories?

The Reoccuring Curse of Low-Fat Labels

This happens all the time. Often the fat-free version is not much lower in calories than the regular version. For example, each low-fat Oreo cookie has 50 calories. The regular version has just over three calories more.

Low-fat labels can lead us to mindlessly overeat a product with guilt-free abandon.Take granola. Where low-fat granola is indeed lower in fat, it is only about 12 percent lower in calories. It does not take a lot of mindless munching to scarf down an extra 12 percent of granola, especially while thinking you are doing your body good.

So rather than overeating something you donâ€™t even really like, enjoy the regular version â€” but only half as much of it.

I get the impression that that’s the key to European diets, where foods are often much very rich. They simply don’t serve them on oversize plates made to look full with four handfuls of freedom fries.

I believe I’ve fallen into this trap before after long runs or bike rides. I’ll feel like I’ve earned some form of indulgence, but the indulgence I choose may be beyond what I’ve truly earned:

Consider the Four Mile Donut. If we were to walk as fast as we could for an hour, weâ€™d cover a breathless, heart pounding 3-4 miles. If we then decided to celebrate our workout with coffee and a donut, we would eat more calories in a minute than we burned off in an hour.

The most emailed story of the day today on Yahoo reports on a study claiming that you’ll lose the same amount of weight by cutting 200 calories a day out of your diet as you will by burning an extra 200 calories per day:

“It’s all about the calories,” said Dr. Eric Ravussin of the Pennington Biomedical Research Center, part of Louisiana State University in Baton Rouge.

“So long as the energy deficit is the same, body weight, fat weight, and abdominal fat will all decrease in the same way.”

The fact that this is news explains why fad diet books sell so well in America. People still haven’t grasped this obvious concept are susceptible to all kinds of not-necessarily-science-based theories.

Here is a shot of me chillin’ at Trotter’s waiting for a Tortilla Lucia back in early December. Man, I was pudgy and kinda sad:

Compare that to this shot of me taken last week in Las Vegas where I was ten pounds lighter. 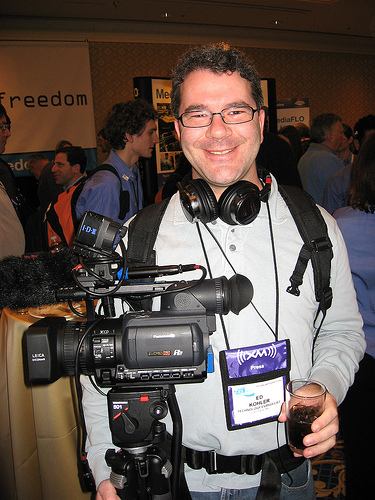 It’s a good thing I dropped the weight because the battery belt around my waist isn’t exactly light. That’s a Diet Coke in my hand, rather than a free beer or glass of wine at the press event. January’s 30-Day challenge is paying off.