This is what’s left of the Kia Forte after the accident I was in this past Monday in Santa Monica, California. The car is clearly totaled, but I’m not. Damaged, yes, but in ways that should fully heal.

This was the first time I’d driven a Kia Forte. Overall, I was pretty happy with the car. It was comfortable, the cruise control was easily accessible and intuitive. And the car had a USB charger, so I could top off my phone without whipping out my power inverter. That may not be what you look for in a car, but those features are high on my list. I wish I could remember what I drove the week before in Virginia Beach, VA. That car’s only cup holders were in the door panels, and slanted. Seriously unusable. A deal breaker for me.

It turns out that the Kia Forte has a solid safety record: 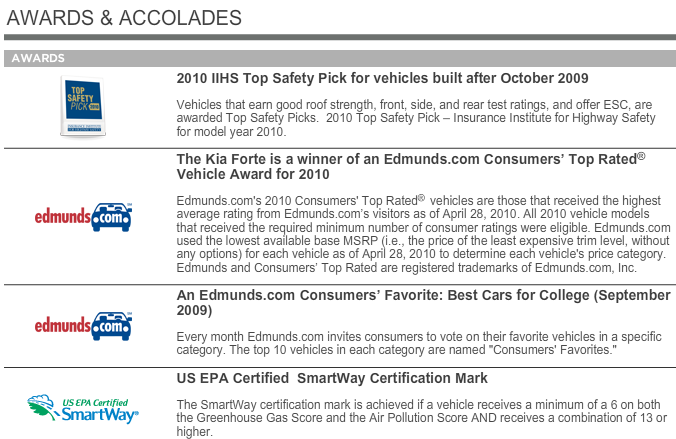 I think the model I was driving was the EX Automatic base model, which appears to retail for $16,190 after rebates these days.

I don’t think the Kia Forte is the only car that could have kept me alive and walking after a crash like that, but I’m very pleased with the job this car did in this circumstance. I spotted this unfortunate situation near Lake Nokomis on Saturday morning. I imagine there’s an interesting story here, assuming the driver can remember it.

In Warren Buffett’s biography, The Snowball, a lesson in longevity that Buffett shares with college audiences is retold. He asks students to ask themselves how they’d approach buying an maintaining a car if, when they turned 16, they had the option to buy any new car on the market that year.

He gets into how you’d put more thought into picking the right car. Then after buying it, how much of a better job you’d like do maintaining it since it has to last your entire lifetime.

In the end, he applies the life lesson to how you should take care of your own body since it’s the only one you’ve got.

I haven’t been able to figure out how to get back into my 16-year-old mind, but based on my observations over the past 19 years, I think the Honda Accord or Civic would have had the best chance surviving this long.

Which car from the year you started driving would have the best shot at still being on the road today?

You’ll often hear people talk about the benefits of ownership as it applies to owning vs. renting. You get some tax breaks, don’t have to worry about annoying landlords, and you probably won’t share a thin wall with undesirable neighbors.

However, for most people, home ownership isn’t really ownership in the true sense of the world. You’re really just buying a right to live in a home that you’ll eventually sell. Because of this, most people don’t treat their homes like they really own them. Instead, they make home “improvements” based on a combination of what they’d like improved and what would improve the value of the home when they eventually decide to sell it.

If this is the case, you don’t own your home. Your home owns you. Accept it.

There are times when you can tell when someone truly owns something. For example, here is a picture of the hood of my first car: My brother, a friend Nate, and I bought that car (1964 Malibu?) from a neighbor for $100, and we OWNED it. Those trophies / hood ornaments were mounted onto the hood by drilling through it and screwing them on. Screw resale value. That’s ownership.

This isn’t to say that you have to destroy stuff to truly own it. But it’s nice to be able to know you have the option.

Things that I truly own in 2009 include my computer, bikes, skis, and car, but not house (in fact, I think the bank may own my entire home).

What items do you really own these days?

CarZen helps narrow down car make and models based on a series of profile questions. According to that site, here are the top-10 cars I should consider buying: This set of results came from my interest in a reliable, high mileage car with some cargo space for under $25,000. Reliability plus high mileage seems to have knocked American cars off the list and that price point is tough for German cars to hit. After parking in the ramp behind Metropolitan Lofts recently, I noticed that a vehicle in the lot had a note on it. Figuring it may be some sort of classic passive aggressive note, I checked it out. That doesn’t really fit the profile of a truly passive aggressive note. For example, there are no underlined words, and the request seems reasonable. However, is the sign the note writer refers to really that clear? Let’s take a look at the sign: Okay, that seems pretty clear. Private parking is a pretty cut & dry explanation even without the towing warning.

Additionally, there is a Compact Stall sign on the wall. Let’s pull back a bit: Seriously? Since when is a Dodge Dakota a compact car?

I feel the pain of the Metropolitan Lofts owner who has to put up with this crap. I have so many questions about this Green Bay car’s decor:

1. When was the last time the shotgun seat’s shirt was changed? Hasn’t Saddam been captured (and dead) for a while now?

2. Isn’t the Got Milk question kind of strange on a Hooters shirt?

3. Are those clouds on the back seat?

4. Did anyone, ever, really say, “So Damn Insane!” about Saddam Hussein?

5. What is the relationship status of this car’s owner?

6. Where are the Packer colors?

Does cold weather hurt a Prius’ mileage? Yes, according to Minnesotan, Michael Wurzer.

All cars get worse mileage when it’s cold. Duh.

How does that compare to your car’s mileage at -13F? Does your car even start at that temperature?

So, yes, the Prius gets worse mileage in the cold, bringing it down to the mileage of a typical high-mileage car on a summer day.