The most successful 30-day challenge we ran at the Kohler household in 2008 was to unsubscribe from the dozens of print catalogs that were clogging our mailbox.

I buy a lot of things for our household online because it’s very convenient and often cheaper. However, one side effect of this over time has been the addition of our names and address to many catalog retailer’s mailing lists.

It turns out that just because we purchased something from a company doesn’t mean we want to form an ongoing monthly or quarterly print relationship with that company.

Looking back at this, it’s pretty clear that one of the unforeseen problems was caused by shopping on Amazon.com. Amazon doesn’t spam us with catalogs, but quite a few items purchased through Amazon are shipped directly from 3rd parties. For example, a few bike tubes I purchased on Amazon were shipped by Bike Nashbar. That’s not a problem until Bike Nashbar considered me a customer of their company based on that purchase, thus catalog worthy.

In many cases, we ended up on more than one catalog from the same company such as their separate catalogs for mens and womens clothing.

I decided to make an effort to unsubscribe from as many catalogs as I could over 30-days. I stacked them on a table as they arrived then set aside time to unsubscribe from them in batches. I also joined catalog unsubscription services such as GreenDimes figuring that they may help and likely wouldn’t hurt.

Many companies, when contacted directly through their online contact forms (few have specific forms for unsubscribing from catalogs), would reply to confirm my unsubscription requests with a warning that we’d likely receive 2-3 months worth of additional catalogs due to their printing and mailing scheduling systems. At least we were making progress.

After a few months, we actually started to notice a drop off in the amount of mail we received daily.

Then a strange thing happened. We started to enjoy checking the mail for the first time in a long time. Our mailbox was longer viewed as a six times a week chore of filtering through junk mail for the few items we actually needed or wanted such as checks or bills. The sound of our mailman Pat dropping of mail became a pleasant reminder that people and businesses we wanted to hear from were contacting us.

On some days, we didn’t hear anything at all. Our mail load dropped so much that we started to go days without receiving a single letter.

Of course, now that we’re in the holiday season, our mailbox is rarely empty. Instead, we look forward to receiving cards from friends and family rather than last-minute pleas to spend money on things we don’t want or need.

Lesson learned: You can control what arrives at your home’s inbox. While it does take time to unsubscribe from catalogs, turning checking your mail back into a positive daily ritual has many rewards including time, money, and the environment.

My 30-day challenge this month is to unsubscribe from as many catalogs as possible that arrive at the house.

This is a case where making the environmentally friendly choice provides an immediate positive return.

It’s Sunday, so there has only been one day of mail so far. That was enough to knock off 8 glossy catalogs.

I imagine our postman Pat’s spine is thanking us.

While we risk being uninformed consumers without monthly reminders of all the crap we should be buying, I think that’s a risk worth taking. We’ll help avoid printing hundreds of pounds of paper every year and conserve the fossil fuels used to print & deliver the catalogs.

Last month’s 30-day challenge was initially scheduled to be, “Don’t eat any packaged food.” Well, that didn’t happen, but we did pull off a somewhat less ambitious challenge: “don’t go out to eat alone, or just with eat other.” Not exactly difficult. Mission accomplished. Bring the troops home.

This month’s plan is to: “Go for a walk outside every day” and “take at least 3 pictures a day.” The pictures are flowing in, but Carly and I haven’t seen each other to go for a walk yet this month. And walking alone is kind of like drinking alone.

I’ve also thrown in, “No high fructose corn syrup.” This was kind of tough on the road trip back from Fort Wayne since we had a stash of Mike & Ike’s and Hot Tamales within arm’s reach at all times. If I find myself in need of a Coke, I may be able to find Mexican Coke at Costco or at many of the stores along E Lake Street.

It’s just after 10pm on Jan 30th, which means I have 26 hours to go on my January challenge of no alcohol. Not that I’m counting or anything.

Frankly, giving up drinking alcohol has been a lot easier than soda. Convenient access to caffeine is apparently tougher for me to overcome than the effects of beer, wine, and Boone’s.

This is probably the longest I’ve gone without drinking since I started drinking, so I think it will be interesting to see what effect one beer will have on my system.

Which brings me to this questions: Which beer should I have first in February? I like to think globally and drink locally, so I’m leaning toward something from the area. Maybe a trip up to Barley John’s to try their Extra Special Lager?

What would you do?

I mentioned previously that Carly and I are going to do 30-day challenges in 2007. It turns out that was no BS. Here’s a breakdown of the first 6 months goals: 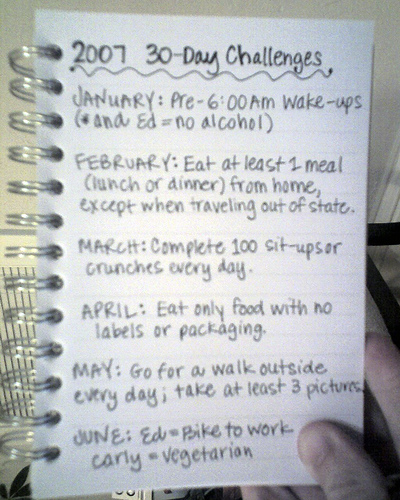 The early morning wake-ups will coincide with early morning trips to the gym. It will be good to see the folks back at the gym again. Is Jan 1st the busiest gym day of the year? If not, is it the 2nd of Jan?

I face two big challenges with the no-alcohol month in January: a trip to Las Vegas and Broomball season. It’s not clear which one’s more enabling. Friday’s our season opener for broomball, so that will be the first big test. Oh, and Carly wants to take a wine tasting course around the 25th. 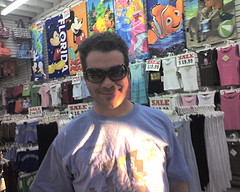 Carly thinks I’m going to lose a lot of weight by booze out of my diet for a month. Maybe I should have picked up these Nichole Ritchie style sunglasses in Miami?

Carly and I are planning a series of 30-day challenges in 2007. It seems like a long enough time to challenge oneself to some form of life-changing habit, but tolerably long for those that turn out to suck. For example, Carly and I just wrapped up 30 days without soda, which was surprisingly easy. Chances are pretty good that I won’t go back to drinking anywhere near the soda I drank before (~6 cans a day).

We haven’t decided what 30-day challenges we’re going to try yet, but have some ideas. Somehow, I don’t think this one will make the list for Carly:

Amanda Kelso was a 12-year veteran of vegetarianism when she went AWOL. She blames pork. “Bacon was a temptress to me,” she says in her 30 Days of Pork series on photo-sharing site Flickr.

Bacon is a temptress for me too. Just last Friday I enjoyed bacon wrapped little wieners. What a delicacy of pork-on-pork goodness those are.

What would you recommend for 30-day challenges? The theme is to do lifestyle improving things, so things like dining choices, exercise goals, friendship related, etc., are what we have in mind. Any thoughts?