I write this from the Warren Bubble of the Cooper Neighborhood of Minneapolis. 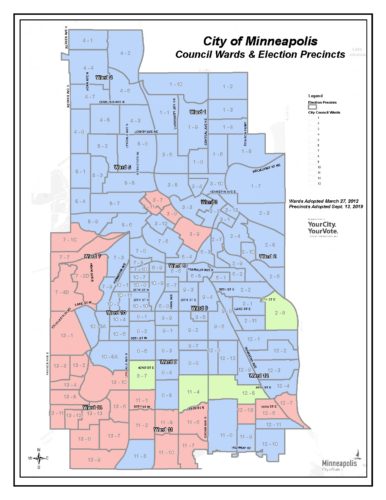 Thanks for David Brauer for mapping this.

I feel like the area of Minneapolis I live in has a ton of people who work at the U at other universities, in public policy, for non-profits in leadership roles, as teachers, and other roles that come together around a candidate who understands the problems Americans face, and which candidate would be most capable of creating systemic change due to her expertise and track record. Clearly, not everyone agreed.

One way to think about presidential campaigns is like startups. You can have the perfect idea for a startup and still fail if the market for what you’re creating isn’t large enough, or you’re simply too early. Your startup can solve a real and important problem, but if there aren’t enough people willing to support the business it’s not going to survive.

Facebook was far from the first social media site. YouTube was one of many startups working on video streaming. There have been thousands of dating-related startups but few have turned into viable businesses.

It can be incredibly frustrating to be both right and too early. Or right and not be able to make a viable business out of what you’re creating.

Presidential campaigns are like this. If you’re right on the issues but your platform doesn’t resonate with enough voters, you’re screwed.

Why does this happen?

It could be that your candidate wasn’t able to connect with enough people who show up to vote to explain to them that they’d be better off in your version of the future.

If could be that the candidate’s platform would resonate with people who show up to vote but the candidate didn’t resonate with those people. This could come down to age, race, gender, and religion or other issues. In this case, age didn’t seem to be the issue.

What Should We Do?

My first choice candidate did not win the primary. Yours probably didn’t either. You’re not alone. That’s how primaries work. It’s frustrating when that happens, but what’s most important is to not give up. Even without our first choice candidate winning the nomination, we’ve moved the party toward where we’d like it to go. It’s frustrating to take baby steps instead of leading a revolution, but it still far better than the alternative.

We have some options on where to go from here. We could give up, and pretend that there is no difference between Biden and Trump. We’ve seen that play out over the past four years so we know that isn’t the best approach.

We could throw our weight behind Biden so we can at least press the reset button. Don’t sit it out. Help get the country back to a semblance of normalcy.

We could help flip US Senate seats in order to give Biden’s platform a chance of passing. The only thing worse than a moderate president is a moderate president who can’t even make moderate improvements to our country. Here’s a good list of the seats that are at play. The polling may be a bit dated but it’s still useful for figuring out where to spend time or money.

We could flip state legislatures. In Minnesota, flipping the Senate would have a huge impact on what can be done to address issues like underfunded public schools, insulin for diabetics, sensible gun legislation the majority of Minnesotans support, and civil rights for people the MN GOP continues to persecute in twenty twenty. In 2020, the MN GOP continues to have legislators who’re willing to put their names on bills that discriminate against fellow Minnesotans.

We could improve our school boards. If you talk the talk on improving the lives of people at the bottom but don’t think about schools, you’re missing a big opportunity to make a difference. Granted, schools take on a HUGE burden for issues that shouldn’t fall to them. (Ex. Being measured based on student performance while the county and city fail to provide stable, affordable housing or food for students.)

Still, one of the roadblocks to public schools being more equitable is the dominance of wealthy white parents in conversations about what actions school boards should take. Minneapolis has one of the worst public school racial disparities in the country, and this needs to change. This appears to have been a socially acceptable reality until non-white students started leaving the district for adjacent districts or charter schools.

Now, things are getting real since students leaving the district cuts into the entire district’s budget. Not surprisingly, the current reaction from white families to proposed changes is to fight for the status quo (based on previous budgets) that’s worked for them but not for everyone else. #NotAllWhiteFamilies, obvs. It’s the first time in a long time that white families have been as organized as they are now, and it’s not happening because they suddenly started caring about closing the racial education gap.

A cool thing about all of those down-ballot races is that they make a tangible change today, and – in some cases – are stepping stones for people seeking higher offices in the future. Granted, it’s awesome if anyone chooses to run for any of these positions as their ultimate goal. Just be good at what you do while you’re there, no matter how long. Think about it this way: Would you like to have someone who sucks at being a county commissioner, but at least you know that they’ll run for governor someday? Of course not. Work every position on the ballot that resonates with you.

So, continue to fight to move people toward your values. You’re on the right side of history but perhaps ahead of where America is today. Don’t stop caring and don’t stop channeling your energy towards making positive change. If Biden isn’t far left enough for you to put energy into his campaign, fine. But, don’t give up.