There’s a special place in hell for robo-callers who exploit seniors. Bilking retirees out of their retirements through scams over the phone is downright evil.

But, at least the robo-callers have to go through the effort of finding exploitable seniors.

Social media companies make it fairly easy to identify vulnerable seniors so you can fast-track exploitations.

How? By allowing conspiracy theorists and fake news publishers to use their platforms.

But, how does that lead to the exploitation of vulnerable seniors?

Social media platforms allow advertisers to reach very specific audiences, which can be a good thing but can also be used to cause harm. Say you want to reach everyone who lives in a specific state for political advertising, or people who follow a specific political candidate. No problem. Or, you want to advertise to people who like a certain sports team or brand of granola bars so you can attempt to sell products to that may interest people who have those interests. Great.

But, you can also run ads targeting people who follow conspiracy theorists. Why would you do that? Because you can sell anything to people who’ll believe anything. Social media platforms make that easy to do.

I’ve tried to find an example of a vulnerable senior without showcasing one in order to help explain this further. Here’s my attempt.

I searched for “contrails” to find some conspiracy theory believers and found a woman who posted a pic along with text that makes it clear that she’s a true believer that the government is spraying chemicals on Americans from planes during daylight hours. I clicked on her profile and found out that she’s a Catholic MAGA supporter. I then looked her up on Facebook to make sure that she’s a real person. She’s a grandmother living in Northern California.

She believes some crazy stuff, including this: 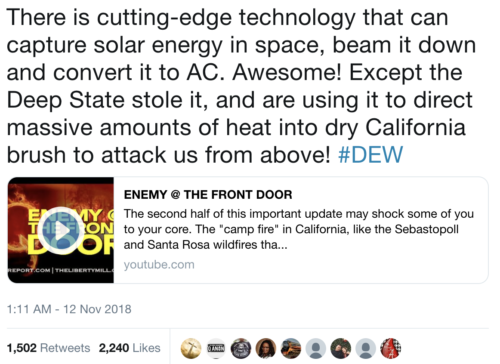 She’s not alone. Just look at how many people liked and retweeted that garbage.

Say you wanted to do something relatively harmless, like sell WiFi routers to conspiracy theorists by inferring that a certain WiFi router is safer than others:

I then targeted people over 50 who live in the United States who’re the kind of people who follow garbage conspiracy theory accounts on Twitter. I expanded the reach a bit by adding qanon76 as an additional Twitter conspiracy account to leverage to find dupable people.

To increase the reach of the ads further, Twitter’s brilliant programmers have figured out how to find larger lookalike audiences. Here’s who their algorithms suggest adding to my “accounts followed by people susceptible to right-wing conspiracy theories” portfolio:

Not surprisingly, it suggests including Seb Gorka, Jack Posobiec, and Dan Bogino, among others. (Imagine being a member of the House of Representatives and showing up on such a distilled list of garbage people. That would make you Rep. Jim Jordan or Rep. Devin Nunes.)

I added a few of those names to my portfolio and Twitter suggested even more garbage accounts to follow in order to increase my reach. These include one of the president’s sons, the official account of the White House Press Secretary, Sarah Sanders, Kellyanne Conway, and quite a few FOX News show hosts:

But, I don’t want to reach all of the followers of mainstream right-wing misinformation accounts. I just want to distill an audience of the truly dupable.

So, why can I do this? Because Twitter allows garbage to exist on their platform. Think about the advantages for social media companies compared to mainstream media sources. If you tried to put a show on the air or print content that appealed to fringe audiences like this in a mainstream media outlet you’d be laughed at, and face protests against advertisers. For example, Sleeping Giants has been quite successful at getting advertisers to stop advertising on Breitbart and many FOX News shows. But that’s largely a case of mainstream businesses running ads on relatively mainstream media platforms.

What social media advertising allows is for fringe advertisers to reach fringe groups who’ve demonstrated through their online behavior that they’ll believe anything. This is an audience that’s ripe for exploitation by nefarious businesses interested in tapping into the retirement savings of the elderly. It’s a self-service way to reach soft targets, and you don’t even need to pick up the phone.