Rep. Pat Garofalo’s energy bill in the MN House has $5 million in incentives for purchases of electric cars and $5 million toward solar installations. Here’s why that’s a strange mix.

The US Department of Energy has a calculator where you can type in a zip code to determine what carbon impact electric cars and hybrids have based on where you happen to live. Where you live makes a difference since the sources of electricity vary by region. Here’s how it breaks down for Xcel users in MN: 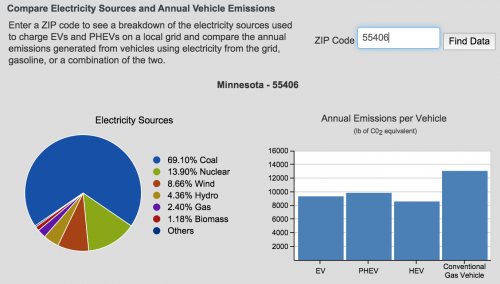 What that’s saying is that all-electric cars actually produce more carbon than plugins since we burn so much coal to create electricity in MN. The assumptions can be found here.

For comparison, here’s the same chart using the 90210 zip code: 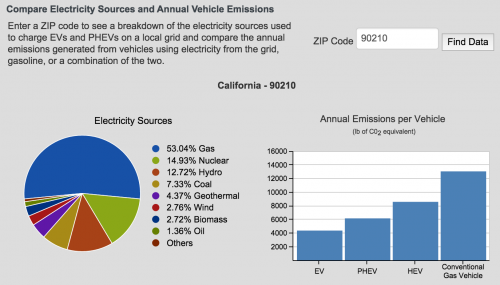 Electric vehicles certainly do reduce carbon emissions compared to normal 27.6 MPG gas vehicles. The above report shows a reduction of 1.8 tons of carbon output per year. And, again, that amount is only saved if someone switching to an electric car made that move from gas rather than hybrids.

Compare that to the solar system on my house, which is projected to save 3 tons of carbon output per year.

Then, consider that a solar system lasts 30 years while the average life of a car is probably 10 years since the battery would likely need to be replaced by then, which would probably not be justifiable in a 10 year old car.

So, Pat Garofalo’s energy bill has $5 million in tax incentives for two different forms of clean energy improvements. Solar panels, which could save, say, 90 tons of carbon over 30 years. Or electric cars, which need to run, unrealistically, for 50 years to achieve the same carbon output savings as solar panels.