If you don’t own a smartphone in Minneapolis, keep an eye out for pink mustaches on cars. Those cars are driven by people who will soon be able to legally discriminate against you. No matter how much you want or need a ride, they won’t be allowed to pick you up:

Despite a push for one ordinance to cover both industries, the final language delineates clear differences. Only taxis can pick up passengers who hail them on the street…

Here’s a breakdown of smartphone ownership rates from Pew:

Critics of the proposal said that Lyft and Uber, now known as “transportation network companies,” will . . . discriminate against certain passengers.

Like, the majority of people making less than $30k/year.

The proposal’s sponsor, Jacob Frey, countered that the city will audit where the companies have been accepting and denying rides. Plus, he noted, taxis are already discriminating.

This sounds like a great deal for Lyft and UberX. They can’t be accused of denying rides from the majority of people making under $30k/yr because they’re not capable of requesting rides since they don’t have smartphones.

“As a cab driver, I cannot raise my rates,” said driver Fred Anderson. “And I’m obligated to take all customers unlike [transportation network companies]. This is not a level playing field.”

Sounds like Fred Anderson and his fellow drivers need UberX and Lyft’s deep pockets in order to hire better lobbyists so they can discriminate too. Or, UberX and Lyft could be held to the taxi standards and already exist.

The city will impose a license fee of $35,000 a year on transportation network companies, and another $10,000 as a surcharge if they do not have handicap-accessible vehicles.

Here’s a breakdown of the licensing costs for traditional taxis in Minneapolis: 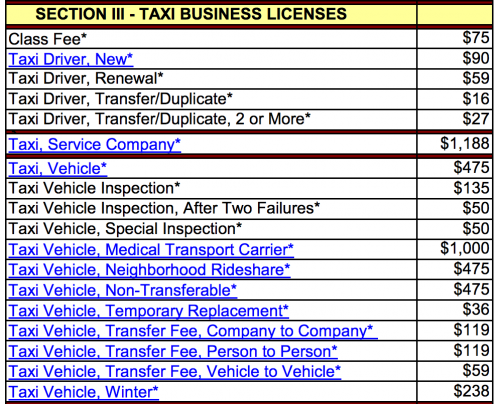 Assuming Lyft or UberX have more than 52 drivers, the differences in licensing costs appears to be another example of the advantage of having good lobbyists on your well-funded side.

Listen up, Poors. If you want access to all forms of government regulated transportation in our world-class city, you’re going to need a smartphone with a data plan. We’re not discriminating. That’s just the way it is because world-class cities welcome innovators.