A friend of mine used to say that you’re not running if you’re not going faster than 8-minute miles OR wearing headphones. By both of those two measures, I was definitely jogging today: 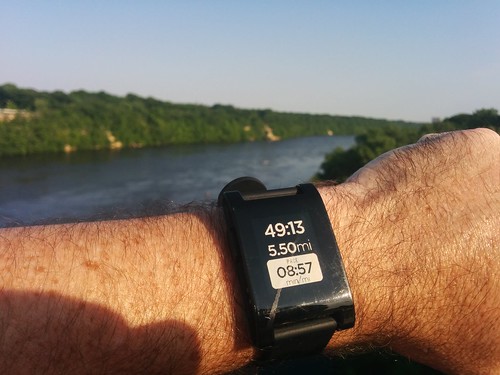 I’ve experimented a bit with some tech options to distract me while running. The current setup is working fairly well. I normally run with my phone, with earbuds, listening to podcasts, with Runkeeper tracking my route/pace/time. And, with a Pebble watch, I can see real-time workout data without turning on my phone and looking at my phone while running (you probably need to be running 7-sevens for that to still be considered running).

Before arriving at the Pebble angle, I had a Garmin Forerunner 10 watch, which didn’t give me the data I was looking for. There were two main issues:

1. I couldn’t hear the mile markers while wearing earbuds.

2. I had to toggle between screens to see the data I was most interested in seeing (time/distance/pace).

A third issue is that it often took a long time to find a GPS signal at the start of workouts.

The Pebble itself isn’t a GPS. It just detects when Runkeeper is activated, then streams the data to the watch over Bluetooth. It works great. And, the price is nearly the same.

My Pebble is 6 months old now, and is showing some signs of wear. It either scratches easily or I should never buy a really expensive watch. Probably a bit of both. But, it gets the job done.