Who would argue that fuel efficient cars are getting a free ride? If you guessed “Michael E. Webber, a professor in the energy department of a university in Texas where ExxonMobil is the largest corporate donor” you’d be correct:

Switching to a ton mile fee solves several problems at once: It raises the revenues we need for our transportation projects while ensuring that electric and natural gas vehicles don’t get a free pass.

The ExxonMobil funded professor’s proposal is to charge people a tax for every mile driven, then adjust by vehicle weight, so lighter cars would pay less than heavier ones. He explains that here:

It would also encourage people to drive smaller cars fewer miles, which would achieve additional benefits like reduced petroleum consumption, emissions, traffic congestion and wear and tear on the roads and highways.

You know what else would achieve those goals? Raising the gas taxes.

His plan could also encourage people to drive lighter, less fuel efficient cars, like the 14 MPG Camaro rather than the 1-ton heavier – but actually more fuel-efficient – Dodge Durango: 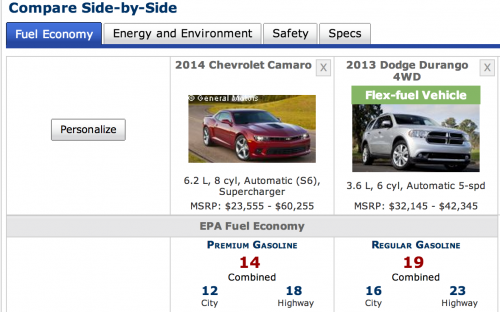 But, the ExxonMobil real benefit under his VMT * weight plan is that it takes away one of the real incentives for buying the hybrid version of the same vehicle with virtually the same weight. For example, it costs around $4,000 more for the hybrid version of the Camry, but you’ll save quite a bit of money on gas (and gas taxes) over the life of the car, which helps economically justify that environmentally friendly decision: 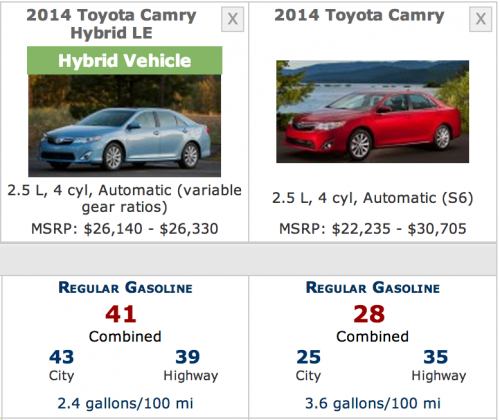 Hybrids sell better when gas prices are higher, which leads to cleaner air, less revenue for ExxonMobil, and ExxonMobil professors justifying eliminating one of the benefits of hybrid vehicle models.

How much money are we talking about?

Assessing a half-cent fee per ton mile would cost a typical American car owner about $50 per year and would cover the highway fund’s revenue shortfall, according to my calculations.

If all we need to do is raise $50/year from drivers to solve our transportation funding gap, we could divide that $50 into the 561.5 gallons/year of gas burned per drive annually and realize that raising gas taxes by 8.9 cents/gallon would bring in the same revenue as this professor’s ExxonMobil supported, convoluted tactic.

Let’s take a look at this professor’s argument in favor of his VMT * weight scheme again:

It would also encourage people to drive smaller cars fewer miles, which would achieve additional benefits like reduced petroleum consumption, emissions, traffic congestion and wear and tear on the roads and highways.

Do you honestly believe that raising gas taxes by 8.9 cents/gallon (or, charged $50 annually) would achieve any of those things? Frankly, I have a hard time believing that he actually believes what he’s written.

Republicans should like it because it would end the subsidies for alternatively fueled vehicles . . .

So would raising the gas tax to a point where alternatively fueled vehicles were price competitive with carbon spewing ones. That actually would “reduced petroleum consumption, emissions, traffic congestion and wear and tear on the roads and highways.”

and Democrats should like it because it would encourage energy conservation.

So would raising the gas tax.

In this new phase of partisan agreement on budgets, revising the gas tax would be one more step in the right direction.

Can we all agree to agree with this ExxonMobil funded argument? Please?

Or, we could just raise the gas tax.

Keep this fact in mind: There were about 260 million Americans in 1993 when the tax was last raised. Today there are over 315 million. And we travel more miles than we did two decades ago. That means the transportation infrastructure has to do more with less per-mile spending, adjusted for inflation.

He points out that we don’t have as much transportation spending power because the gas tax hasn’t been raised in 20 years, isn’t adjusted for inflation, or even taxed as a percentage of the price of fuel. It’s just a flat tax per gallon that hasn’t increased since “I Will Always Love You” by Whitney Houston topped the charts. However, he doesn’t jump to the simplest solution (raise the gas tax, then adjust it to inflation). That would involve removing his ExxonMobil funded thinking cap.

And, as we move into cities and use mass transit we will drive less.

Let’s throw people who ride buses and trains under the bus? Perhaps ExxonMobil can buy up our country’s newly laid LRT lines and tear them out? It wouldn’t be the first time they’ve done that.

Good. It’s dirty and dangerous to extract, refine, and transport, bad for our health, and bad for the environment.

At the same time, alternatively fueled cars such as electric vehicles don’t pay gasoline taxes at all, and others, such as natural gas vehicles, pay a lower rate on average, so the current system subsidizes their use.

I guess we could ignore that people driving fuel-efficient cars still pay a ton of taxes toward transportation through income, property, and sales taxes. That seems like a solid move for an ExxonMobil funded professor to make. One thing we won’t see from this ExxonMobil funded professor is a mention of how people who don’t own cars subsidize drivers through sales, property, and income taxes.

That means our gasoline purchases — and our gas taxes — are declining, putting a strain on our trust fund.

As an ExxonMobil funded professor, is he more concerned about declining gas taxes or gasoline purchases? Considering that his proposal is to actually eliminate gas taxes, which would lower the price of gas at the pump, it seems possible that people might end up buying more gas. Consider this: Do people buying heavier, more expensive cars (along with the higher taxes and licensing associated with them) consume less gas due to the higher annual fees? Would bumping up those fees by $50 change their behavior?

The problem is already acute. Since 2000, spending by the highway fund has generally outpaced revenues; since 2008, the fund has required an infusion of $41 billion from the federal government’s general fund.

A problem as simple to solve as increasing the gas tax is not a particularly challenging problem. As we get closer to finally adjusting the gas tax to deal with today’s economic realities, I can see why ExxonMobil and other carbon spewing companies would prefer to see our transportation infrastructure funded by something other than a tax on their pollutant.

And, again, guess who’s tax money is being used to finance the “infusion” that makes up for the gas tax shortfalls? Drivers of fuel efficient vehicles and people who don’t own cars at all.

As Kim P. Cawley of the Congressional Budget Office argued this summer in testimony before a House subcommittee, “The current trajectory of the highway trust fund is unsustainable.”

Indeed. It’s hard to pay for something that has increased costs when you’re using a tax last increased in 1993. But, that doesn’t make it an impossible problem to solve. In fact, it’s quite simple.

One other option would be to stop building/maintaining roads that encourage sprawl, lead to more gas consumption, but not nearly enough gas consumption to cover the cost of the roads and bridges that encouraged the sprawl. That tends not to be mentioned in this or other “lower the gas tax” editorials.

One choice, of course, would be to raise the gas tax. But this would surely raise the ire of many people and might be politically untenable.

Ire? We can’t have ire. Ire is what happens when people have to face the true costs of commuting by truck from an exurb. That must be avoided at all costs, right, ExxonMobil? ExxonMobil will surely do their part to help avoid rising the ire of many people by lobbying at all levels of government to make sure this doesn’t happen.

Coincidentally, as @sumnums pointed out on Twitter, ExxonMobil tossed some money at the NY Times while they’ve been running this ExxonMobil funded professor’s gas tax lowering argument on their homepage: 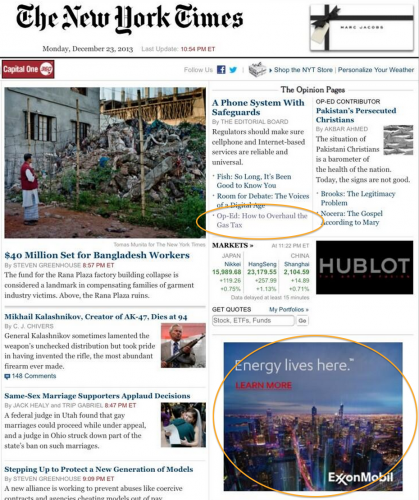